We have added the first set photos from the upcoming epic 3D underwater adventure/fantasy film Empires of the Deep previously entitled Mermaid Island. Plot Details: Mermaid legends have existed all over the world for thousands of years, attracting people from all over the world. Many questions remain unanswered regarding this bewitching and enigmatic race. Why do mermaids tempt humans with their seductive songs? What secrets lie hidden deep within their legends? Empires of the Deep will provide the answers in spectacular style. Empires of the Deep is a unique undersea fantasy adventure, which uses the latest in CGI to shape a new and exciting underwater world. This world is inhabited by mermaids, giants, an evil mage and dozens of different undersea kingdoms and races: each with their own cultural traits. The giants are more powerful than the mysterious mermaids but both must ally together to battle an ancient evil Our protagonist is a young man with a hidden power. After a local temple is ghosted away overnight, he begins his search and encounters the mysterious mermaid Aka * their meeting triggers an unforgettable series of events which shake the mermaid world to its very foundations. The movie explores the mysterious and apparently bizarre characteristics of mermaids, depicting their danger as welI as their exquisite beauty; and how their love can be both bewitching and deadly. Other themes explored by Empires of the Deep include the battle between good and evil and one man’s struggle against his own destiny. It is a fantasy movie about magic and demons, with spectacular battles and an epic story transcending a thousand years. Empires of the Deep will introduce audiences to an entirely brand-new style of huge action set-pieces, a host of fantastical creatures and amazing underwater fight scenes. It will combine mystery and intrigue with incredible sea battles. Spectacular underwater scenes and battles will attract younger audiences while deeper themes regarding the nature of evil, will provide enough substance to keep adult audiences entertained* Empires of the Deep will be the first movie in a planned movie franchise including comic books, animation and online games: all of which are currently under development. Other derivative products such as gifts and theme parks are also planned. 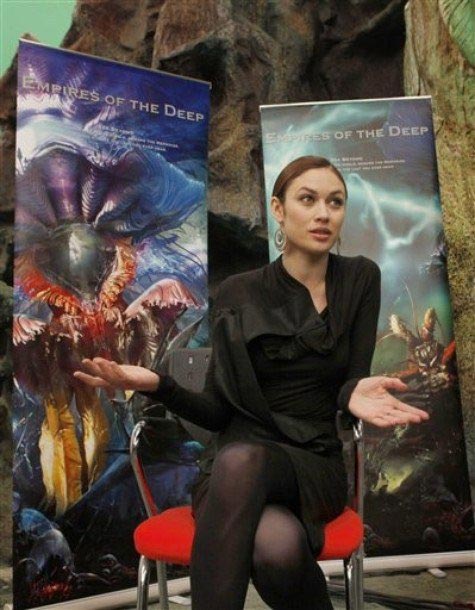 Empires of the Deep, Olga Kurylenko

Empires of the Deep Set Photos US/China co-produced film, directed by Michael French (Powder Heads, Heart of a Dragon), stars Olga Kurylenko, Jea Choe, Sam Voutas, Alec Su, Jean-Michel Casanova, William Shriver and Maxx Maulion. Empires of the Deep, which is yet to have its official release date, is slated for 2011 release. [source: Empires of the Deep Facebook Group]

Continue Reading
Advertisement
You may also like...
Related Topics:Empires of the Deep, Olga Kurylenko