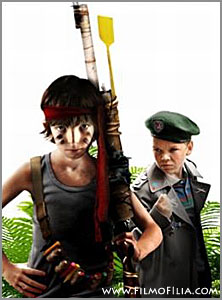 Whilst the old mumbling machete wielding ‘Nam veteran didn’t really do too well we’re still chuffed to bits with the “Son of Rambow” – and even more so that we have a brand spanking new clip from the film.A long English summer in the early 80’s and two boys are about to form an unlikely friendship. Will Proudfoot has been brought up in a strictly religious household, forbidden to watch TV or listen to music. But after Lee Carter, the school trouble-maker, blows Will’s mind with a pirate copy of Rambo: First Blood, Will’s easily persuaded to act in Lee’s home-made movie sequel. Armed only with a camera – “borrowed” from Lee’s brother – and their limitless imagination, the pair plot stunt after stunt, dodging teachers and family all the way, as they do whatever it takes to finish their masterpiece in time to enter it in the national Screen Test competition. In a time of crackling space dust and dodgy haircuts that have somehow made their way back the ‘Son of Rambow’ steps out and tells a brilliantly funny and sweet story – be sure to keep an eye out for the films verdict closer to release (4 April). In the mean time check out the clip below and whatever you do – keep an eye on the ball.
Continue Reading
Advertisement
You may also like...
Related Topics:rambo