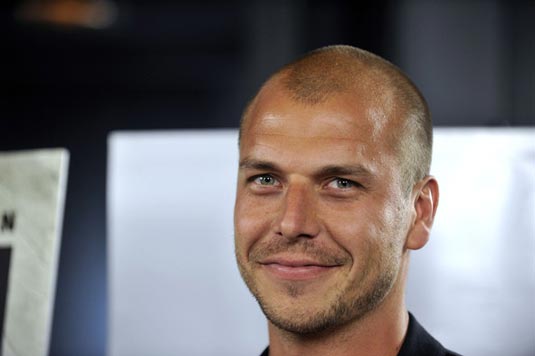 Yesterday, Sylvester Stallone has hinted that they’ve hired Patrick Hughes to direct The Expendables 3. Wait, what?! Third? Come oooon! That’s just… too much. Ok, the first part was in “so bad that it is good” range, I still haven’t seen the second and I’m still thinking if I should, but the THIRD sequel? Seriously? I’m not familiar with the director at all but, according to Internet, he made a couple of shorts and a movie called Red Hill (that I have never seen). Stallone posted the following on his Twitter:

EX3 Needs freshness, class, and much badass, ….Found it… Blood Sweat and Fears, coming soon… My best PURE ACTION FILM – The last RAMBO – I want this one to top it and I believe it will with NEW BLOOD.

I guess he thinks that Hughes is the perfect man to turn his testosteron dreams for The Expendables 3 into reality. At some point even, Stallone asked what people thought about Mel Gibson possibly directing the film, but it looks like that didn’t fare quite well. The last film starred – in addition to Stallone – all of contemporary (and legendary) action figures: Jason Statham, Jet Li, Dolph Lundgren, Chuck Norris, Nan Yu, Randy Couture, Terry Crews, Liam Hemsworth, Jean-Claude Van Damme, Bruce Willis and Arnold Schwarzenegger. It sure will be interesting to see who they plan on bringing back, as well as who will agree on that. Rumor has it that Jackie Chan will most likely join in, and that they were also in talks with stars such as Clint Eastwood, Harrison Ford, Wesley Snipes and Nicolas Cage. None of those names has been officially confirmed yet, though, so stay tuned for updates!