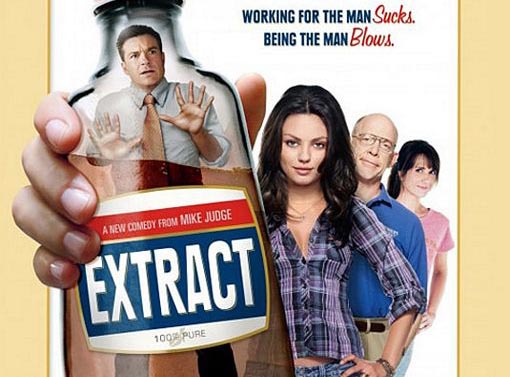 Mike Judge’s Extract is a strange and almost unnecessarily restrained examination of a man under stress. In it, Jason Bateman plays Joel, and he’s under a great deal of pressure. His work situation is difficult. He’s the boss and though he works hard for them, his employees regard him as the enemy. His personal life is little better. His wife Suzie (Kristen Wiig) has become frigid. Before he comes home every day she puts on a pair of sweat pants and pulls the drawstring extra tight, as if to say to the camera, this entry point is closed. Neither situation is to Joel’s satisfaction, but he’s unable to take responsibility for it. Instead all he can think of is escape…read more[Cinema Blend] The things men do for women. Isn’t it bizarre? Friendships get ruined. Marriages get destroyed. Lives are forever altered. What is it that makes us trample others to reach the female object of our desires? It’s like a shark to chum, flies to poop and Cookie Monster to vegetables (he’s a vegetarian now). We’re so quick to abandon all hopes and dreams just for a chance to be with perceived beauty. Never is it thought out clearly what consequences lay ahead, especially if things don’t work out exactly the way they were planned. In Extract, consequences are considered, but perhaps not enough sober thought was put into what they’d be…read more [The Film Nest]

Extract is actually a funny movie, but in no way is it going to be the next movie that everyone is going to remember for the next 10 years and reminisce about over late night coffee. I would say you can even rent this movie as it is only a so-so comedy. It is not the funniest movie of the year, or even close and there is nothing else in it that makes it a must see movie…read more [The Reviewer] Idiocracy was notable for satirizing even as it reveled in the dumbing of America. (Once seen, it provides an invaluable way to characterize the nation’s nightly cavalcade of cable news.) Judge must have taken the lesson of Idiocracy to heart, because, as Hollywood comedies go, Extract is amazingly free of gross-out vulgarity. If anything, it’s overly polite and anything but anarchic. Establishing a rhythm of workaday repetition set to a country-western backbeat, the movie is characterized by its crisp, cutting, classical framing, and comic timing…read more [The Village Voice]

Now, Judge is back to the daily grind with “Extract,” but this time the writer-director tells his wacky working tales from the boss’ point of view: that of Jason Bateman’s Joel Reynold, owner of a flavor extract factory. It’s doubtful that this comedy will grab its audience in the same way, though. Judge’s characters are so one-note and their misadventures so ridiculous that it’s hard to get attached to them or care about how they turn out. Pretty much everyone in “Extract” is stupid, unlikable, self-destructive or all of the above — and so there are no real surprises…read more [Film Crave] For a comedy, “Extract” is kinda depressing. Understand that wildly dysfunctional characters have become the norm in American comedies, but the characters in “Extract” give dysfunction a bad name. Not a single person in this ensemble comedy doesn’t suffer from colossal stupidity. Nor does anyone possess a moral compass. So from this contrived situation, writer-director Mike Judge, the creator of “Beavis and Butt-Head” and “King of the Hill,” wrings all the yuks as he can. “Extract” might be live action, but it still plays like a cartoon…read more [THR]