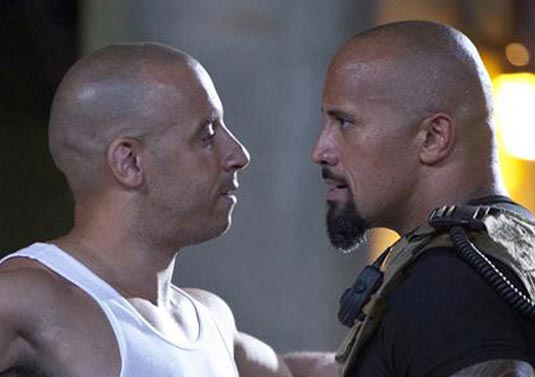 “One of the things I’ve always loved about the franchise – the reason I think it’s been so successful over the years – is that they never stop trying to up the action,”

“If you’re going to do a Fast and Furious movie, you’ve got to go bigger each time,” says Lin. “People thought it would be impossible to get Dwayne. But he didn’t show up looking to cash a paycheck. That’s pretty amazing, for a star like him to join the fifth part of a franchise. That says a lot about him and the fans. I think what keeps it going is that it’s not really about cars. I have to be honest: I’m not a big car guy. At the core, Fast and Furious is about family and how to create them.

The vibe was electric when Dwayne walked on set. The whole crew was buzzing with him, Vin, and all these other huge action stars on one set. It was like having (Sylvester) Stallone and (Bruce) Willis in the same movie.”

Since Brian and Mia Toretto (Brewster) broke Dom out of custody, they’ve blown across many borders to elude authorities. Now backed into a corner in Rio de Janeiro, they must pull one last job in order to gain their freedom. As they assemble their elite team of top racers, the unlikely allies know their only shot of getting out for good means confronting the corrupt businessman who wants them dead. But he’s not the only one on their tail.

Hard-nosed federal agent Luke Hobbs (Johnson) never misses his target. When he is assigned to track down Dom and Brian, he and his strike team launch an all-out assault to capture them. But as his men tear through Brazil, Hobbs learns he can’t separate the good guys from the bad. Now, he must rely on his instincts to corner his prey… before someone else runs them down first.