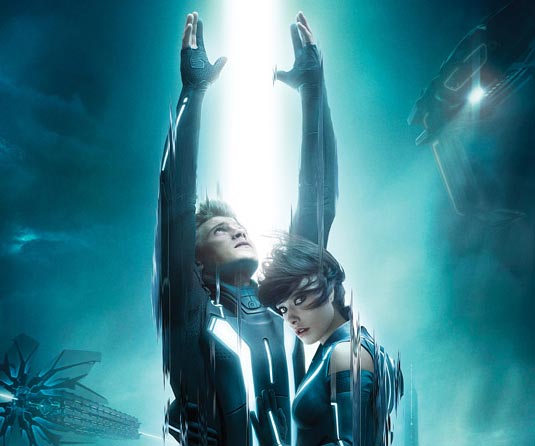 Walt Disney Pictures has revealed the final poster for Tron: Legacy,  which features Garrett Hedlund as Sam Flynn and Olivia Wilde as Quorra, as they pay homage to an original poster from 1982’s Tron. You can check out the original poster below as well. Sam Flynn, the tech-savvy 27-year-old son of Kevin Flynn, looks into his father’s disappearance and finds himself pulled into the same world of fierce programs and gladiatorial games where his father has been living for 25 years. Along with Kevin’s loyal confidant, father and son embark on a life-and-death journey across a visually-stunning cyber universe that has become far more advanced and exceedingly dangerous. Joseph Kosinski directs the Sci-Fi thriller, which co-stars Michael Sheen, Serinda Swan, Bruce Boxleitner and John Hurt. Tron: Legacy will be hitting 3D theaters and IMAX 3D theaters December 17th, but until then keep it here for all your Tron: Legacy news. You can click here and browse our gallery of images, posters and wallpapers from the film.