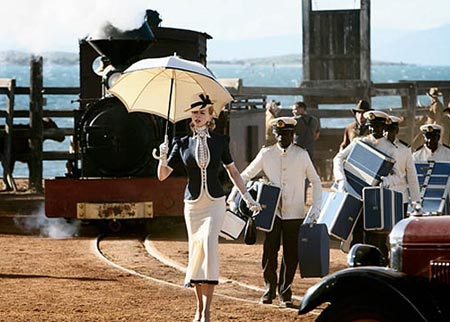 Well that was interesting; I just had a rather unusual and incredibly cool screening experience here in lovely Aliso Viejo getting to see a pre-release cut of Australia by Baz Luhrmann. Unusual in that the guy handing out the invite had no idea what the film was. And cool in that I will go see this AGAIN when it’s playing for real. This isn’t the movie you might expect from Baz Luhrmann. It isnt Moulin Rouge and certainly isn’t Romeo and Juliet, instead it’s (at least to me) an epic, dramatic story of love set against a visually stunning backdrop with a surprisingly strong performance from Kidman and a refreshing change of pace performance from Jackman. That’s quite a mouthful and fitting because this movie is quite a mouthful, actually a stomach full that I’m sure will take me a couple days to fully digest…and it’s GREAT!!