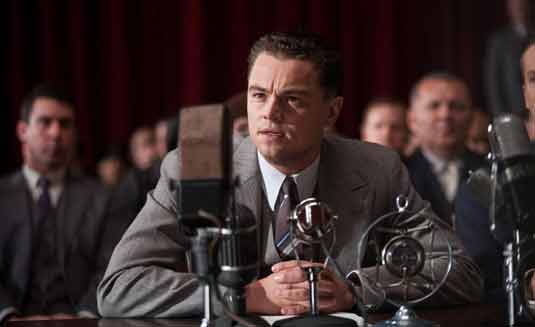 Nothing new in here, simply because we’ve been talking about this movie since…I don’t know since when, but we’ve been talking a lot about the whole thing. So, thank God we finally have the first trailer for Clint Eastwood‘s upcoming biopic titled J. Edgar. I usually have nothing against the projects which are based on the true stories, but I’m not fascinated by this trailer. Maybe it’s a little too dark for me, I don’t know… On the other hand, I like Leonardo DiCaprio‘s new look, and as usual, we all expect to see a strong performance from him, especially when we have a role like this – controversial man like J. Edgar Hoover. If we’re going to judge all that from this trailer – I guess he did a hell of the job. As you already know, J. Edgar is based on the life of J. Edgar Hoover, the man often credited with making the FBI what it is today: an efficient, crime-fighting organization shrouded in secrecy. Hoover founded the organization in 1935 and remained director until his death in 1972. DiCaprio and Armie Hammer are the highlights of this movie. But, the rest of the cast is also interesting and it includes Naomi Watts, Josh Lucas, Jeffrey Donovan, Ed Westwick and Judi Dench. J. Edgar opens on November 9. [youtube]http://www.youtube.com/watch?v=XlZXdCdOhLo[/youtube] J. Edgar Trailer
Continue Reading
Advertisement
You may also like...
Related Topics:Armie Hammer, Clint Eastwood, Ed Westwick, J.Edgar, Josh Lucas, Judi Dench, Leonardo DiCaprio, Naomi Watts