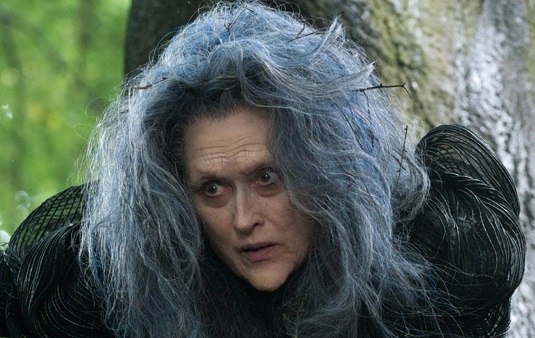 Just above and below is your first look at Meryl Streep in a long, matted gray wig in Walt Disney Pictures’ upcoming Into the Woods, which is currently set to hit theaters on December 25th, 2014. The most nominated actress in history portrays the Witch who wishes to reverse a curse so that her beauty may be restored – complete with yellowing talon-like nails and a feathery frock. The big screen adaptation of Stephen Sondheim and James Lapine‘s musical ‘Into the Woods‘, directed by Rob Marshall (Chicago), started production last week in London. A modern twist on the beloved Brothers Grimm fairy tales also stars Anna Kendrick and Chris Pine as Cinderella and Prince Charming (below) along with Johnny Depp as the Wolf who sets his sights on Little Red Riding Hood, Lilla Crawford as a spunky girl Little Red Riding Hood, Emily Blunt as the Baker’s Wife, James Corden as the Baker, a hard-working man who desperately wants to start a family, Daniel Huttlestone as an absentminded and adventurous boy Jack, Tracey Ullman as Jack’s mother, Christine Baranski as the infamous Stepmother, MacKenzie Mauzy as a sheltered young woman Rapunzel, Billy Magnussen as the dashing and eager Prince who courts Rapunzel, Lucy Punch as Cinderella’s spoiled stepsister, Richard Glover as the Princes’ royal steward, and more. Into the Woods is currently slated to hit theaters on December 25th, 2014.

Here’s the official synopsis taken from the recent production announcement:

Into the Woods is a modern twist on the beloved Brothers Grimm fairy tales, intertwining the plots of a few choice stories and exploring the consequences of the characters’ wishes and quests. This humorous and heartfelt musical follows the classic tales of Cinderella, Little Red Riding Hood, Jack and the Beanstalk, and Rapunzel—all tied together by an original story involving a baker and his wife, their wish to begin a family and their interaction with the witch who has put a curse on them.