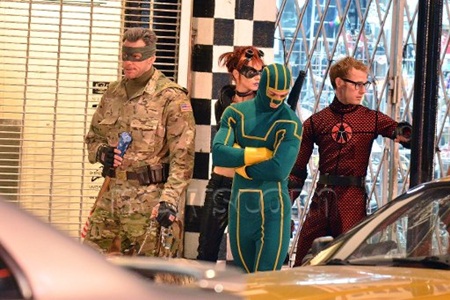 We’ve known for some time that Jim Carrey has been set to portray Colonel Stars who teams up with Aaron Johnson’s amateur superhero in the new Kick-Ass movie. Well, a first look at the leader of ‘Justice Forever’ on the set of Kick-Ass 2 on the streets of Toronto (which has been transformed to look like New York) has been unveiled. Carrey is spotted with a khaki eye-mask shooting the scene alongside Johnson, Lindy Booth and Robert Emms who are clad in Kick-Ass, Night Bitch and Insect-Man costumes. In addition, a set video of Kick-Ass 2 is shared online — Christopher Mintz-Plasse whose aspiring supervillain Red Mist takes evil to the next level with the help of the brawny broad Mother Russia is seen filming a scene where his character robs a convenience store before fleeing with a taxi. The Kick-Ass sequel is directed by Jeff Wadlow, who also works to pen the script alongside the first film’s director Matthew Vaughn. Also joining the sequel are Chloe Moretz as Hit-Girl, Nicolas Cage as Big Daddy, Olga Kurkulina as Mother Russia, and Andy Nyman as The Tumor bringing the action on August 16th, 2013. [youtube]http://www.youtube.com/watch?v=El-_0fJZOZs[/youtube] [youtube]http://www.youtube.com/watch?v=CUFY_m090Jc[/youtube]