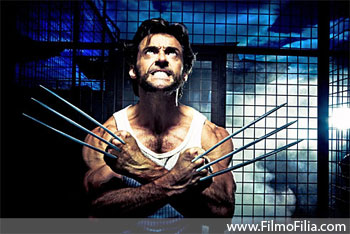 As if a guy with temper issues, iron blades for fingernails and a penchant for cage fighting needed it, Wolverine is about to get even surlier. “I know it seems odd given, you know, the guy is already half animal,” says Hugh Jackman, who revives the character in Wolverine, due in theaters May 1, 2009. “But with all the success of the X-Men, you feel the pressure to keep pushing it further.” Jackman, also a producer on the film, says he never expected the story of mutants trying to fit in “to catch on the way it did.” (Since the first film hit screens in 2000, the X-Men franchise has taken in more than $1.1 billion worldwide.) “But I became a fan of Wolverine like everyone else. That’s why I keep holding on to the character.” Wolverine will be a prequel to the X-Men saga. It will center on the origins of the superhero with animal-like reflexes, an alloy skeletal system and the ability to heal from virtually any wound. He also could use a friend. “I think one of the reasons the X-Men took off is that it connected in a way nobody saw,” Jackman says. “They’re mutants with powers. But they’re also outcasts for being, and everyone connects with that on some level. And who wouldn’t want the power to get back at the people who ostracized you?” The film will trace Wolverine’s past as he discovers the world of mutants and, ultimately, the ominous Weapon X program, which turns people into living weapons. Jackman is tight-lipped on plot details, though he says the film will hardly be a one-mutant story. Wolverine’s nemesis Sabretooth “is going to play a big part in it. And there will be a good bit of cameos” of new and familiar mutants, he says. “But you can’t give too much away, because fans are pretty hard-core. Their expectations go up a level every time you come out with a new film.”
Continue Reading
Advertisement
You may also like...
Related Topics:wolverine