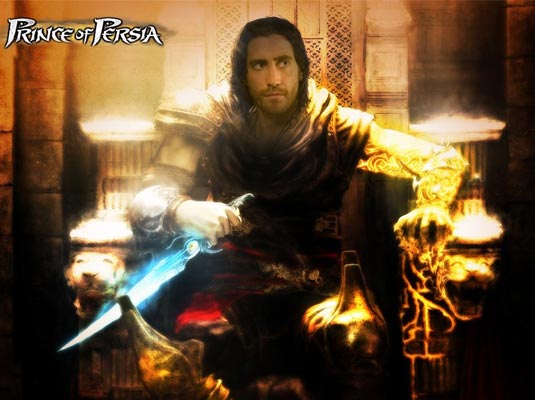 Jerry Bruckheimer‘s adaptation of the video game “Prince of Persia: The Sands of Time” was recently featured on a recent ABC movie special, featuring the producer talk about plot details and show off some of the scenes already shot for the Walt Disney production. Plot summary: Set in medieval Persia, the story of an adventurous prince who teams up with a rival princess to stop an angry ruler from unleashing a sandstorm that could destroy the world. Which is why after the prince was tricked by a dying Vizier to unleash the Sands of Time that turns out to destroy a kingdom and transforms its populace into ferocious demons. In his effort to save his own kingdom and redeem his fatal mistake, it’s up to the prince and the princess to return the sands to the hourglass by using the Dagger of Time, which also gives him a limited control over the flow of time. Starring Jake Gyllenhaal, Gemma Arterton, Ben Kingsley, Alfred Molina, Toby Kebbell, Reece Ritchie, Gísli Örn Garðarsson, and Ambika Jois. “Prince of Persia” is directed by Mike Newell (Harry Potter and the Goblet of Fire) and is scheduled to hit theaters on May 28th, 2010. [youtube]http://www.youtube.com/watch?v=UUnoO17ZJgM[/youtube]
Continue Reading
Advertisement
You may also like...
Related Topics:Alfred Molina, Ben Kingsley, Gemma Arterton, Jake Gyllenhaal, Jerry Bruckheimer, Mike Newell, Prince of Persia: The Sands of Time, Toby Kebbell