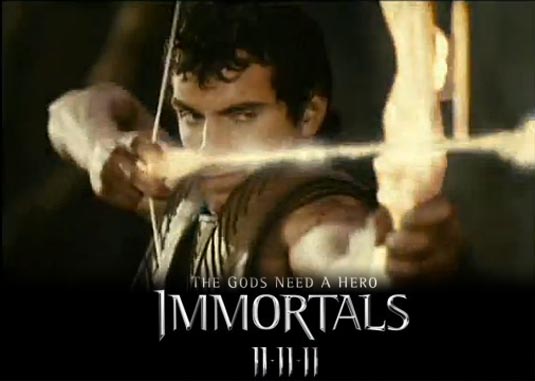 Relativity has debuted the first trailer for the upcoming Immortals 3D film, which is directed by Tarsem Singh (The Cell), and stars Henry Cavill (Superman: Man of Steel, The Tudors) as Theseus, a warrior from Greek mythology, who leads a fight against the imprisoned titans in a story where gods fight alongside mortals. Phaedra (Freida Pinto), an oracle priestess joins Theseus on his quest to prevent the cataclysmic war from erupting.

Along with Cavill and Pinto the film also stars Mickey Rourke as King Hyperion, Luke Evans as Zeus, Kellan Lutz as Poseidon, Stephen Dorff as Stavros, John Hurt as an older version of Zeus, Isabel Lucas as Athena and Daniel Sharman as Ares.

Immortals Synopsis: The brutal and bloodthirsty King Hyperion (Mickey Rourke) and his murderous Heraklion army are rampaging across Greece in search of the long lost Bow of Epirus. With the invincible Bow, the king will be able to overthrow the Gods of Olympus and become the undisputed master of his world. With ruthless efficiency, Hyperion and his legions destroy everything in their wake, and it seems nothing will stop the evil king’s mission.

As village after village is obliterated, a stonemason named Theseus (Henry Cavill) vows to avenge the death of his mother in one of Hyperion’s raids. When Theseus meets the Sybelline Oracle, Phaedra (Freida Pinto), her disturbing visions of the young man’s future convince her that he is the key to stopping the destruction. With her help, Theseus assembles a small band of followers and embraces his destiny in a final desperate battle for the future of humanity.

Check out the new trailer, then sound off with your reactions in the comments below.