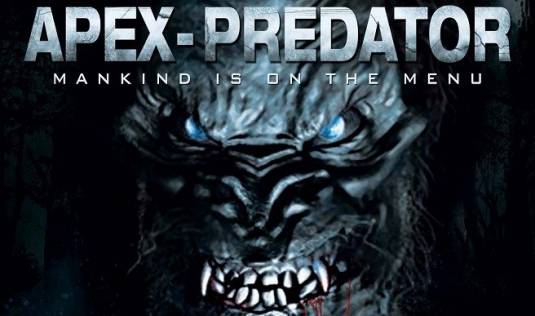 Mankind is on the menu… Well, the last time I heard something about this movie, the title was Night Claws, and I think that tagline was something like – living is not an option, or whatever. The most important thing for you to know is that this is actually the same movie which comes from director David A. Prior but now has a completely new title – Apex Predator! Today we have a pretty cool trailer and poster for the whole thing, so make sure you check it out!

So, in case you’re not so familiar with this horror movie, I will first inform you that David A. Prior is also responsible for the script, which he co-wrote with Fabio Soldani. The movie has some interesting cast on board which includes Frank Stallone, Leilani Sarelle, Sherrie Rose, David Campbell, Ted Prior, Tara Sanford Kleinpeter and Alissa Koenig.

The movie is set in a small town terrorized by a killer Bigfoot: he (it?) is blood thirsty, vicious and kills without warning and without discrimination:

A scientist by the name of Sarah Evans shows up to help the town’s sheriff and his deputy girlfriend Roberta hunt this thing down and put an end to the killings. At the same time, Hunter Crawford is a thug-like character who along with his two henchmen, is hunting the creature himself, for his own personal gain and he does not care who he has to go through to accomplish this. Enter Charlie Parker a tough east coast type who is on a survivalist camping trip, led by the seasoned survivalist Sharon Farmer at the behest of his young trophy wife and whom, by no fault of his own, winds up being used as bait for the creature, by Hunter. But there is more at work here than meets the eye. A sinister plot is afoot and at its center is the vengeful Mister Testi. And in the end this plot takes a twist that no one will expect.

Unfortunately, at this moment there’s still nothing on Apex Predator release date. But, don’t worry, with every single update on this one – we’ll be back, so stay tuned and let us know what you think about the movie so far!

Continue Reading
Advertisement
You may also like...
Related Topics:David Campbell

Another Trailer For KILLING THEM SOFTLY Is Here!
The Official Brown-Band Trailer For Jordan Downey’s THANKSKILLING 3
Advertisement