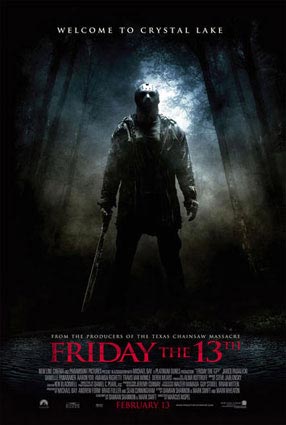 The Friday the 13th franchise was never great when it came to continuity. We had “Long Night at Camp Blood,” where mom killed because her boy drowned. We had “Friday the 13th Part 2: Jason’s Revenge” where boy killed because mom got killed. Then we had Friday the 13th Part 3: Cognitive Dissonance where boy came back looking completely different than he did earlier that day. So, if you’re already a fan of Friday the 13th, then you won’t have a problem with this. You’ve already accepted and/or ignored the problems with the mythology and shoved them aside for the reward of boobies and kills. Boy, does this one have them both! If you’re coming in cold, the film’s lip service to the original mythology will probably have you zoning out until things pick up at the midpoint…full story [411mania.com] Horror remakes are a very touchy thing. On one hand, most of the films that are remade are either old or foreign, lending the producers to think that a higher budget will guarantee success. However, most of the remakes have faired poorly with fans of the original films, with some notable exceptions. One of these exceptions was 2003’s The Texas Chainsaw Massacre. Michael Bay’s Platinum Dunes handled the film with some care, however it was not all that I thought it could have been. I wasn’t the biggest fan, but the film was a large success with fans, critics, and the general public…full story [UGO] This review of Friday the 13th is for people who are fans of the 1980s style of slasher horror movies. If you are not into movies whose sole purpose is to display gore, a variety of ways to kill people (who you probably wouldn’t mind seeing come to a grisly end), sex and nudity via thinly developed characters, then move along folks – nothing to see here. If however you’re looking for an R-rated horror thrill on the big screen, read on. Now it’s a well established fact here on Screen Rant that for the most part I am not a fan of movie remakes. Most of them are made simply to cash in on a well known film and they’re usually poorly done and bring nothing new to the story put forth in the original…full story [Screen Rant] As a fan of the Friday the 13th franchise, I’ve seen every film numerous times and I know the formula. There are patterns of suspense and gore that every Friday the 13th film follows. All the characters, including Jason, act in predictable ways that fans of the series have come to know and expect, and similar situations play out again and again. While this film attempts to break out of some of those patterns in an effort to make it feel fresh, it also succeeds in making it feel like something other than a Friday the 13th movie in several spots. Clay and Jenna’s recon of the deserted camp emulates Jeepers Creepers and almost all of the scenes in Jason’s old house and mine shafts felt like missing reels from The Texas Chainsaw Massacre. While I like both of those movies for what they are, they felt out of place here and made me less enthusiastic during those moments…full story [VGLosers] The cold iconography of the hockey mask doesn’t hurt, either. I simply doubt that there would’ve been ten-plus movies about Jason Voorhees had he simply continued to wear a cloth sack on his head. For me, and so many others, Jason is almost someone we’re stuck with. We know he’s not really ever going away for good, and like human sin itself, he has a habit of continually re-emerging. We turn the corner, and yikes, he’s back! As the bulk of the cast is inevitably reduced to blood-drenched window-dressing at a certain point, so too are our own moral defenses. So once again, we indulge. We see the next movie. In a very odd way, Jason provides a look into the mirror of fallen humanity, and our own shortcomings. In an unlikely way, the more Jason comes back (and of all the movie slashers, he comes back the most often), the more powerful this metaphor becomes…full story [Twitch] 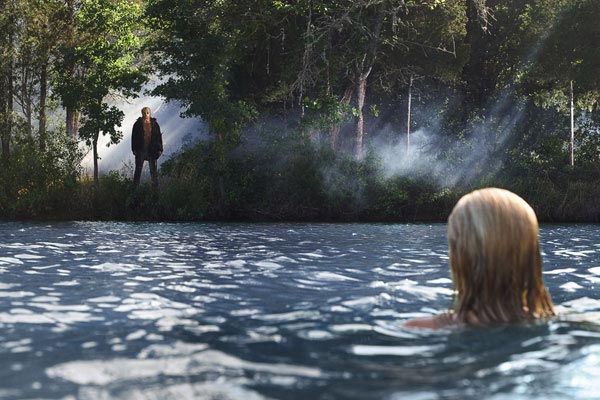 True, the characters often act in unbelievable and downright suicidal ways. ”Where’s he going?” ponders Jared Padelecki upon first espying a corpse-carrying Mr. Voorhees. (Really, that’s the question? Not: ”How the blue blazes do we get out of here?”). However, this film is (be)head and shoulders above the recently reanimated likes of Prom Night and My Bloody Valentine…full story [EW] The best word to describe the reboot of the seminal slasher series Friday the 13th is “reverential.” Brutal, visceral, sadistic, and electrifying would also work. Director Nispel proves that he should be the first name on everyone’s horror remake list. He does such a wonderful job of setting tone and establishing atmosphere that all the film has to do is function in the standard slice and dice mannerisms and it should work. What we don’t expect is the emotional arc, the character impact, and most importantly, the reconfiguration of Jason’s mythos. Everyone knows about the physically deformed boy who saw his mother beheaded and afterwards goes on a ten-film killing spree. What you might not know is how aggressive and animalistic this version of the mass murderer really is…full story [WorstPreviews] This Michael Bay production is a graphic homage to the series that helped turn simple slasher pictures into a formula for success. It may have Bay’s big-budget sheen, and it’s every bit as efficient and heartless as the original Fridays. But for all its attempted jolts, it’s not all that scary. The genre is reduced to “Who gets it next and how?” and never for a second makes us care…full story [NewsDay] This is a body count flick, not a movie about the characters that happen to inhabit those bodies, so character development is not a prerequisite. The cast is composed of likable, good-looking, anonymous young men and women whose roles are interchangeable. Jared Padalecki, the ostensible lead, plays Clay, a motorcycle-riding good guy looking for his missing sister Whitney (Amanda Righetti). He meets up with good girl Jenna (Danielle Panabaker) and her friends, who are spending a weekend at the luxurious lakeside home of her would-be boyfriend, Trent (Travis Van Winkle). Trent is far too much of an uptight asshole to have such laid-back friends, but he has a role to play in the narrative as a kind of one-man deus ex machina factory. Comic relief is provided by the reliable Aaron Yoo (as “Chewie”) and Arlen Escapeta (as the stereotypical “black guy” in a horror movie), while Julianna Guill, Ryan Hansen, Willa Ford, and America Olivo provide additional eye candy. Derek Mears portrays the legendary Jason…full story [Cinematical]

It is obviously a low budget movie with restrictions and a simple scipt, and obviously lacking the scope of something like “The Godfather,” but regardless, it has its place. Mrs. Vorhees and Camp Crystal Lake have permanently imbedded themselves as reality in the mythology of my mind, and I believe it is a movie that vindicates the fans of horror movies around the world…full story [HubWorld]

The teens featured in Friday the 13th are funny, likable and stereotypical, providing the film’s more comedic moments. Their humor made them a step above annoying, and therefore a step above other teens in the series. You won’t be mourning any of their deaths, but while they’re on screen they’re entertaining enough. It wouldn’t be a Friday the 13th film without some serious skin, and the flick doesn’t falter in that category either. This puppy was filled with sex and nudity from beginning to end! As with the kills and overall premise, this version hit all the clichés you’ve come to expect from a slasher flick…full story [Film.com] The film trots out the same ol’ tired horror clichés that were old hat 30 years ago without a hint of irony, a la Scream. Nudity has long equaled death in horror, so it’s absolutely no surprise that every single female who bares her breasts (or more) soon finds a machete through her chest or head. The two standard-issue male hangers-on (i.e. guys without girlfriends) both make the trek – at night – to a tool shed that’s conveniently set far away from the house; one guess as to their fates. The rest of the victims all act as idiotically before their deaths. Here’s a question – wouldn’t it be much more shocking if someone did everything right and still got killed? …full story [PegasusNews] Spoiler warning! At the end of this film, Jason is whacked with an ax and a board, throttled with a chain and dragged into a wood chipper, although we fade to black just before the chips start to fly, and we are reminded of Marge Gunderson’s immortal words. The next day brings a dawn, as one so often does, and two survivors sit on the old pier with Jason’s body wrapped and tied in canvas. Then they throw him into Crystal Lake. Anyone who thinks they can drown Jason Voorhees for the fifth time is a cockeyed optimist…full story [Roger Ebert – Sun Times]
Continue Reading
Advertisement
You may also like...
Related Topics:Amanda Righetti, america olivo, Derek Mears, Friday the 13th, Jason Voorhees