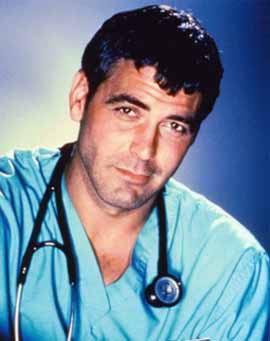 George Clooney is reportedly set to make a comeback on the long-running medical drama ER for its final season. The series’ producer David Zabel is desperate to get characters old and new together for a one-off special to celebrate the hit show ending – namely Clooney, who would reprise his role as Dr. Douglas Ross. The TV drama, which will reportedly end after its 15th season, catapulted the 46-year-old star to the Hollywood A-list after his run on the show from 1994 to 1999. Zabel says, “We want to revisit characters that have existed on the show over the years and say where they are now. We’d love to get them all back in some way , that doesn’t mean we are going to but we are going to try.” And bosses at the show’s network NBC are also eager to bring back actor Anthony Edwards – despite the fact his character Dr. Mark Greene died of a brain tumor. (!?) Zabel adds, “There are ways to do it that we’ve thought about – even if it were like a lost episode from 1996.” Source: IMDb.com
Continue Reading
Advertisement
You may also like...
Related Topics:George Clooney