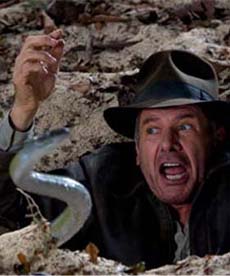 Legendary director George Lucas has spoken about the new Indiana Jones movie and revealed that:

“No matter what you do, it’s not going to live up to expectations!”

Lucas has further words of caution for fans:

“If you think that it’s going to be better than the other Indiana Jones films… it’s not, it’s just as great! I think this one’s a little funnier and more interesting than the others.”

‘Indiana Jones and the Kingdom of the Crystal Skull’ will be released on Thursday, May 22nd and stars returning hero Harrison Ford, Shia LaBeouf, Cate Blanchett and Ray Winstone.