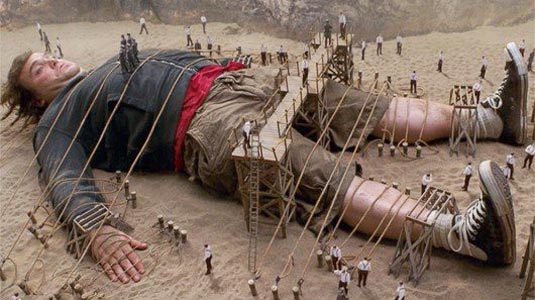 Electric Dynamite and 20th Century Fox have released an official movie trailer for the upcoming live-action family adventure film Gulliver’s Travels, which is directed by Rob Letterman and based on the 18th-century novel of the same name by Jonathan Swift. Gulliver’s Travels plot synopsis: In a contemporary re–imagining of the classic tale, Jack Black stars as Gulliver, a big–talking mailroom clerk who, after he’s mistakenly assigned a travel piece on the Bermuda Triangle, suddenly finds himself a giant among men when he washes ashore on the hidden island of Lilliput, home to a population of very tiny people. At first enslaved by the diminutive and industrious Liliputians, and later declared their hero, Gulliver comes to learn that it’s how big you are on the inside that counts. The film stars Emily Blunt (Charlie Wilson’s War, The Wolfman), Jason Segel (Despicable Me, Forgetting Sarah Marshall, Knocked Up) and Jack Black (Kung Fu Panda: The Kaboom of Doom, Year One, Tropic Thunder), Amanda Peet, Billy Connolly, James Gorden, Catherine Tate and Chris O’Dowd. Gulliver’s Travels hits theaters on December 22, 2010.