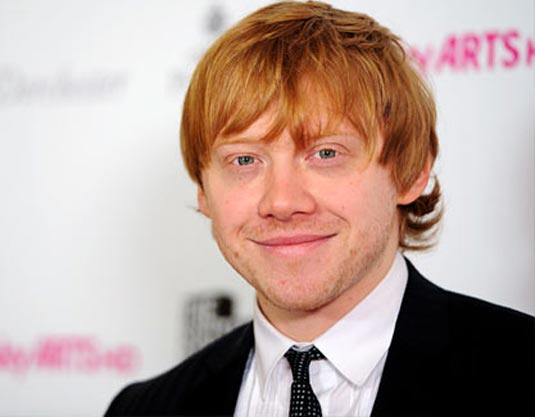 According to Variety, we will see the lovable ginger wizard from Harry Potter in two new movies – The Necessary Death of Charlie Countryman and CBGB. In the first one, directed by Fredrik Bond, Charlie Countryman was just a normal guy… until he fell in love with the one girl who will probably get him killed. When Charlie meets the absolutely irresistible Gabi she’s already been claimed by Nigel, an insanely violent crime boss with a gang of thugs at his disposal. Armed with little more than his wit and naïve charm, Charlie endures one bruising beat down after another to woo Gabi and keep her out of harm’s way. Finally his exploits of blind valor create such a mess that he’s left with only one way out; to save the girl of his dreams, must Charlie Countryman die? The film also stars Shia LaBeouf, Evan Rachel Wood, Mads Mikkelsen, Melissa Leo and Til Schweiger. Alan Rickman (reuniting with his “Harry Potter” co-star in this one) is set to star in Randall Miller‘s (who will also co-star) CBGB as Hilly Kristal who, for more than three decades, owned and operated the famous New York nightclub until a rent dispute forced the establishment to close in 2006. Grint will play Cheetah Chrome of the Dead Boys, who played a prominent role during the club’s rise. I must say I’m quite curious as to how will they portray the punk-rock scene of that time. Both films are slated to release in 2013. Stay tuned for more news!
Continue Reading
Advertisement
You may also like...
Related Topics:Alan Rickman, CBGB, evan rachel wood, Fredrik Bond, Mads Mikkelsen, Melissa Leo, Randall Miller, Rupert Grint, Shia LaBeouf, The Necessary Death Of Charlie Countryman, Til Schweiger

THE LEGEND OF KORRA, Sequel to the Famous Animated Series Avatar: The Last Airbender, Has Started Airing on April 14th
Video and Screencaps From the Set Visit of The Tomb
Advertisement