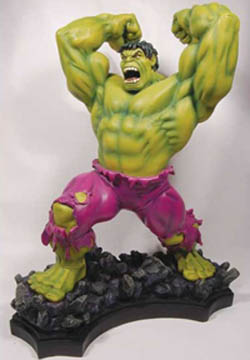 It has been reported earlier that the teaser trailer of action fantasy “The Incredible Hulk” will be outed early March. Universal Pictures have confirmed that the teaser will be released on Wednesday, March 12. The video footage showcasing materials from the movie is set to make its broadcast debut exclusively in a simultaneous “roadblock” on seven different networks. The chosen networks, MTV, MTVU, MTV2, VH1, Spike TV, Nick at Nite and CMT, will simultaneously premiere the teaser at 9:56 P.M. EDT or at 6:56 P.M. PDT. The teaser will be let out on MTV.com for an exclusive period. Then, on Friday, March 14, the trailer will be previewed in theaters around the U.S. attached to  “Doomsday”. ‘Incredible Hulk’ will bow in theaters on June 13, 2008.
Continue Reading
Advertisement
You may also like...
Related Topics:Incredible Hulk