Connect with us
Earlier today, the world’s press in Cannes finally got to see Indiana Jones and the Kingdom of the Crystal Skull. 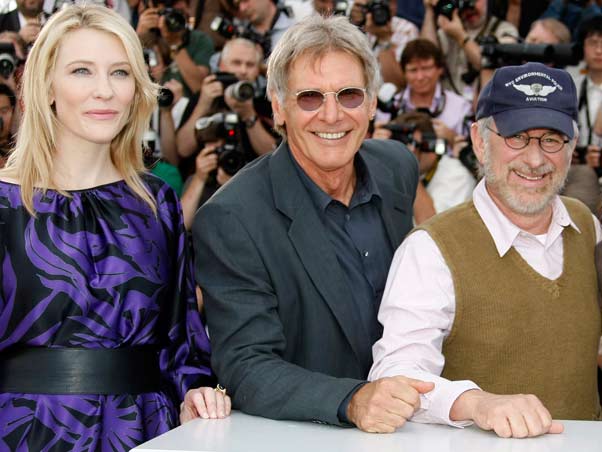 Here is a summary of the critical reaction: Anne Thompson of Variety sets the scene outside the screening and says the film is ‘good enough’ and ‘fun’: ”Indiana Jones and the Kingdom of the Crystal Skull had its world premiere at Cannes at 1 PM May 18; the press anxiously streamed into the Lumiere early, afraid they would be shut out-and many were. There were whoos and whistles before the screening started.The movie unspooled without the usual Cannes logo. The first hour plays like gangbusters and is really fun. Harrison Ford has Indy down, even as a grizzled “gramps” dealing affectionately with Shia LaBeouf as a 60s greaser with a pompadour. The movie will do blockbuster boxoffice, and whatever critical brickbats are still to come…” Her Variety colleague Todd McCarthy says it ‘delivers the goods’: ”One of the most eagerly and long-awaited series follow-ups in screen history delivers the goods, not those of the still first-rate original, 1981’s “Raiders of the Lost Ark,” but those of its uneven two successors. “Indiana Jones and the Kingdom of the Crystal Skull” begins with an actual big bang, then gradually slides toward a ho-hum midsection before literally taking off for an uplifting finish.’ Kim Voynar of Cinematical is also positive, saying it is ‘nicely satisfying’: ”Indy 4 is a nicely satisfying continuation of the franchise, and will please most Indy fans. Though the first act drags a bit, the latter two-thirds of the film pick up the pace, and the film is packed with all the familiar elements fans have come to expect from Indiana Jones. Harrison Ford is older, of course (aren’t we all), but still brings the role all the charm, daring and humor Indy should have.” However, her Cinematical colleague James Rocchi is very disappointed though, deeming it ‘self-conscious and self-satisfied’: ”Loaded with moments referencing the earlier films and full of action sequences that don’t measure up to past highlights of the series, Indiana Jones and the Kingdom of the Crustal Skull feels simultaneously self-conscious and self-satisfied, as if a little warm glow of past glory will soothe our bumps and blows from the clumsiness of the script. The action sequences are nothing to write home about, either; there’s nothing here with the inspired delight of the mine chase in Temple of Doom, or the sheer, guts-and-glory greatness of the truck chase in Raiders. I think most of us want Indiana Jones and the Crystal Skull to be good, which it, sadly, is not.” Jeffrey Wells of Hollywood Elsewhere is mostly admiring, saying he was ‘more than delighted at times’: ”Sections of Indiana Jones and the Kingdom of the Crystal Skull are a great deal of fun. I felt jazzed and charged during a good 60% or even 70% of it. I was more than delighted at times. What a pleasure, I told myself over and over, to swim in a first-rate, big-budget action film that throws one expertly-crafted thrill after another at you, and with plotting that’s fairly easy to understand, dialogue that’s frequently witty and sharp, and performances, Harrison Ford, Shia LeBouf and Cate Blanchett’s, in particular – that are 90% pleasurable from start to finish. I heard some guys say as they left the theatre, “It’s okay…it’s fine…it’s good enough.” I talked to a guy who kind of wrinkled his face and went, “Not really…not for me.” But nobody hates it. It gave me no real pain, and a healthy amount of serious moviegoing pleasure.” Allan Hunter of Screen Daily says ‘the old magic still works’: ”The world can rest easy – the old magic still works in Indiana Jones And The Kingdom Of The Crystal Skull. It may take some breathless, helter-skelter action to redeem the opening hour’s clunky storytelling, but the first Indy adventure in almost twenty years is like a fond reunion with an old friend and will not disappoint diehard fans or deter a new generation from embracing it as a summer blockbuster adventure ride. This is money in the bank as far as exhibitors are concerned, but the relief of some critical support will do no harm to what is destined to stand as one of the year’s top moneymakers.” Kirk Honeycutt of The Hollywood Reporter feels it is ‘charmless’: ”Director Steven Spielberg seems intent on celebrating his entire early career here. Whatever the story there is, a vague journey to return a spectacular archeological find to its rightful home, an unusual goal of the old grave-robber, you must admit, gets swamped in a sea of stunts and CGI that are relentless as the scenes and character relationships are charmless.” The film opens worldwide on Thursday.
Continue Reading
Advertisement
You may also like...
Related Topics:Cate Blanchett, Harrison Ford, Indiana Jones and the Kingdom of the Crystal Skull, Steven Spielberg