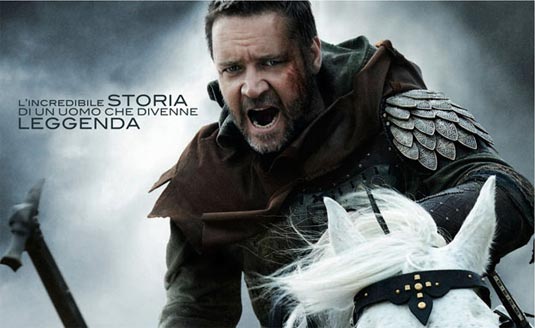 The latest  Robin Hood poster has hit the ‘Net. Robin Hood chronicles the life of an expert archer, previously interested only in self-preservation, from his service in King Richard’s army against the French. Upon Richard’s death, Robin travels to Nottingham, a town suffering from the corruption of a despotic sheriff and crippling taxation, where he falls for the spirited widow Lady Marion, a woman skeptical of the identity and motivations of this crusader from the forest. Hoping to earn the hand of Maid Marion and salvage the village, Robin assembles a gang whose lethal mercenary skills are matched only by its appetite for life. Together, they begin preying on the indulgent upper class to correct injustices under the sheriff. With their country weakened from decades of war, embattled from the ineffective rule of the new king and vulnerable to insurgencies from within and threats from afar, Robin and his men heed a call to ever greater adventure. British filmmaker Ridley Scott (Alien, Blade Runner, Black Rain, G.I. Jane, Gladiator, Hannibal, Black Hawk Down, American Gangster) directed the movie from the script written by Oscar winner Brian Helgeland (L.A. Confidential, Conspiracy Theory, Mystic River, Man on Fire, and Green Zone). Robin Hood stars Oscar winners Russell Crowe as Robin Hood and Cate Blanchett as Maid Marian, Matthew Macfadyen as the Sheriff of Nottingham, Danny Huston as King Richard, Mark Strong as Sir Godfrey, William Hurt as William Marshall and Scott Grimes as Will Scarlet. Robin Hood is scheduled to hit theaters on May 14th, 2010.