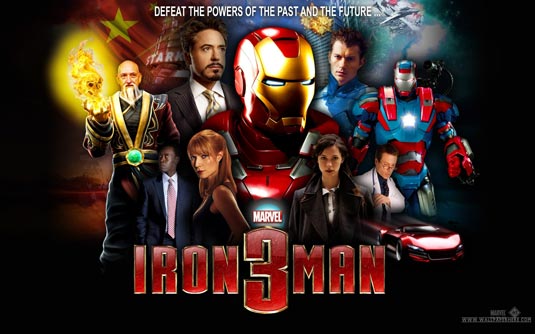 Just like its predecessors Iron Man and Iron Man 2, the sequel Iron Man 3 will kick off the summer movie season the first weekend in May. In an interview with EW, franchise star Robert Downey Jr. recently teased an intriguing scene known as the “Boot/Glove Sequence,” where Tony Stark has to do battle with just one glove and one boot from his full Iron Man suit:

“We’ve just been talking about one sequence – the top-secret name is the Boot/Glove Sequence, I can tell you that, just between you and me – it’s where Tony only has one gauntlet and one boot and he has to escape multiple captors. It’s really fun, dude. We’re taking everything from his first gauntlet test in the first movie up through the most extreme stuff we thought up for Iron Man 2 and The Avengers and pulling on all of it and making this one big, extended challenge of physics.”

Marvel released concept art from this particular scene back at San Diego Comic-Con 2012:

The actor also revealed that Don Cheadle will have a more significant part as Rhodey in this installment:

“Rhodey is much more in the dead center of things. He’s much more dynamic. We’ve made this decision that while Tony is a technical guy, he’s not really a trained guy. There’s a lot of fun to be had with Don because he’s really good with hardware and he’s a martial artist, so it’s been really fun exploiting this possibility of Tony having moments like the one in The Avengers, like the one with Cap where he decides, ‘Oh screw it, he probably knows what he’s doing.’ So there’s a lot of that and a lot more fun and a lot more depth to Rhodey this time around.”

He also spoke about a “movie club” they formed on the set, where cast and crew members would block out a local theater and go see a movie together on the weekends:

“It was a group of us going to the Cineplex and blocking out a theater on the weekends and taking in John Toll [the two-time Oscar winner and Iron Man 3 cinematographer] and taking in sometimes a ton of people and sometimes less. We do something that involves movies and our love of movies…. One was [a movie that Toll shot] the Wachowski’s film Cloud Atlas. We were impressed with how cohesive the direction was, and obviously everything that John shot was amazing. We saw Flight, which was great, and before that it was Argo, which was also kind of cool. It’s nice knowing that you can go to a theater every weekend and see something good. And it’s great to see what people are doing and to get excited about it.”