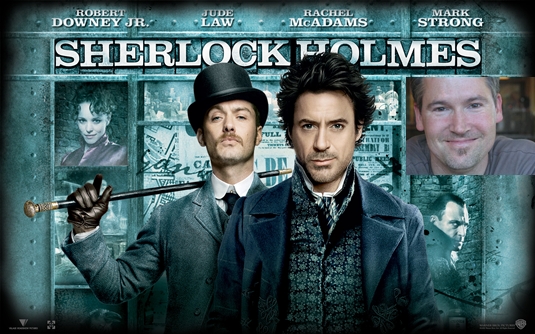 Studio Warner Bros already planning a third film and have hired a screenwriter, two months before the second of Guy Ritchie‘s movies is released. After the success of the first film, and the heavy buzz about a sequel, Sherlock Holmes: A Game of Shadows, it’s not exactly a shock to hear it. At Warners they are already assured they have the formula to repeat the success. Drew Pearce just finished up his other big franchise movie script for Iron Man 3, which is also Robert Downey Jr’s next project. Now, the British writer, who created ITV2 series No Heroics has been taped to scribe the next installment of the period detective adventure movies. RDJ and Jude Law are starring for the Victorian detective’s third outing. The first Sherlock movie, which also starred Jude Law as Doctor Watson, earned six times its production budget and the upcoming sequel has been generating a huge buzz ahead of its December release. Though there’s not yet been any further information released about the threequel, there’s a very good chance that Ritchie will also return. Sherlock Holmes; A Game Of Shadows, which is slated for theatrical release in the U.S. on December 16th, 2011, sees Holmes and Watson teaming up with a beautiful gypsy, played by Noomi Rapace, to compete against arch enemy Moriarty and it features Stephen Fry as Sherlock’s even smarter brother Mycroft. If history repeats itself, timing of the threequel’s winter 2013 release might be just fine. [youtube]http://www.youtube.com/watch?v=lNxhpNpnAkk[/youtube]