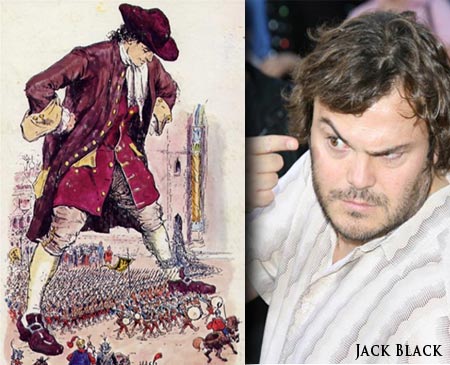 Jack Black has signed on to star in an upcoming 21st century adaptation of the classic Jonathan Swift novel “Gulliver’s Travels.” The comic will play Lemuel Gulliver, the adventurous travel writer who ends up washed up on the island of Lilliput, which is inhabited by tiny people. Rob Letterman, director of the animated flick “Shark Tale” and the upcoming “Monsters vs. Aliens,” is attached to helm the film. Nicholas Stoller (Fun With Dick and Jane, Forgetting Sarah Marshall) is currently polishing a script by Joe Stillman (Shrek). Stoller is in preproduction on “Get Him to the Greek,” which he co-wrote with Jason Segal and is directing. Producing the project are John Davis (Alien vs. Predator) and Electric Dynamite, Black’s production company with Ben Cooley. Fox’s Steve Asbell is overseeing the project for the studio. Brian Manis (Garfield) is overseeing for Davis. The film is set to enter production this March 2009.
Continue Reading
Advertisement
You may also like...
Related Topics:Gulliver's Travels, Jack Black