Karyn Kusama directed “Jennifer’s Body” mixes, matches, and crosses three popular genres: horror, comedy, and teen angst. Unfortunately, it fails at all of them – and “fails” might be too kind a term. This movie is a spectacular disaster, the kind of thing a cat might bury in a litter box and still keep building the covering because the stench can’t be smothered. There are so many things wrong with this motion picture that it might be easier to pinpoint the few elements that are right. “Jennifer’s Body” could easily have turned into a film that borders on adolescent stupidity, but with a script by Diablo Cody that bristles with wit and sharp characters, and director Kusama at the helm, the result is a fresh, wonderfully audacious, incredibly sexy and quite brilliantly funny film that succeeds on more levels than meets the eye. Cody completely subverts a common genre and gives it a distinctly female perspective that drives the narrative throughout while Kusama gives the film her own original point of view, resulting in a work that is both visually imaginative as well as smart and funny…read more [Dark Horizons] Megan Fox is the titular Jennifer, a blessed-with-looks-and-charisma high school girl who has all the boys falling down over her and knows exactly hopw to leverage that to her best advantage. Amanda Seyfried’s Needy, on the other hand, couldn’t be any more different despite her close and long standing friendship. By high school standards, Needy has none of the qualities that make Jennifer stand out – none of the stunning looks, though she’s certainly not ugly, none of the natural charisma. She’ll never captain the cheerleading squad, never be the girl all the boys are talking about. Though Needy is obviously a much smarter, much deeper person than Jennifer will ever be, on a social level she is … well … needy. And so she follows happily where Jennifer leads, which one fateful night leads them to a local bar to see an up and coming band play, a band that attempts to sacrifice Jennifer to Satan in exchange for success but instead end up creating a flesh-hungry monster…read more [TwichFilm]

Well, the Diablo Cody mystique sure ended fast. After a clutch of awards including an Oscar for penning “Juno,” she is back in Toronto a scant two years later with “Jennifer’s Body.” A campy pastiche of horror and high-school movie cliches, the film only rises above standard-issue scare fare by dint of Cody’s sneaky sense of humor. The film will most disappoint those who hoped “Juno” had introduced a writer with a fresh point of view about young people in today’s world. Horror fans, however, will get a kick out of this absurd yarn of a high-school hottie-turned-psycho cannibal, who feasts on all those boys dying to get into her pants. And there is enough of those arch, self-conscious comic lines to remind us this is a Cody screenplay…read more [THR]

Megan Fox as Jennifer Check, Jennifer’s Body The performances are great: Fox is legitimately good as the Demon Babe, consistently hitting the rightish note in a role that would be really easy to blow up into pantomime sex-bot ridiculousness. On the meta-level, coming off as she was at the time her star-if-not-making-then-beginning-to-make turn in Transformers, its nice to see Fox take a role that will ultimately be overshadowed by her co-star’s. Jennifer’s Body is not going to do much for Fox’s career, but it should do tonnes for Amanda Seyfried’s. It’s her film entirely, from start to finish, and its odd but not unexpected that, from looking at the film’s promo material, you’d never know she was in the film. Cody will go on, Seyfried and Fox will go on, they’ll all have interesting full careers, and their collaboration will go down as a film whose quirky combo of genres and styles produced a handfull of standout moments and scenes but ultimately never gelled…read more [Horror-Movies.ca] So far, nothing special. The opening scene opens up with some light JUNO-ish music and for a split second I think that it’s Juno narrating, what with quick quips and a sarcastic tone. Everything moves very much like JUNO and in fact most of the cast from JUNO is back. J.K. Simmons is back in a delightfully funny role as a teacher with a hook for a hands and the haircut of a crazy person. Juno’s mother is back as another mother and even the Asian girl from outside the abortion clinic scene is back for just one scene again. Why you can even see Diablo Cody as a bartender if you look close…read more [Joblo] 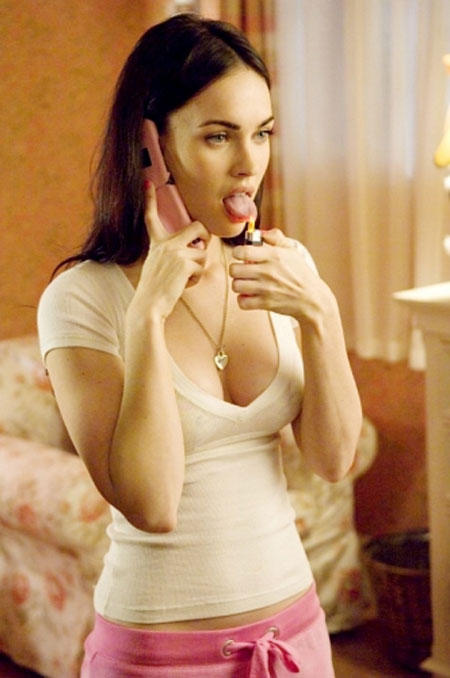 Part of the problem is that Cody’s script, for all its clever subtext and zippy lines, only sticks to the status quo of horror plotting, never giving the story the subversive zing the more comedic moments promise. And director Karyn Kusama is great at capturing the nuanced relationship between the two girls and letting the funny lines sing, but stages every horror moment as the same old “walking down a shadowy hallway” gambit. Even when the horror scenes come with lines like “Nice hardware, Ace,” they don’t feel much different than the wisecracks Freddy Krueger might make…read more [Cinema Blend] 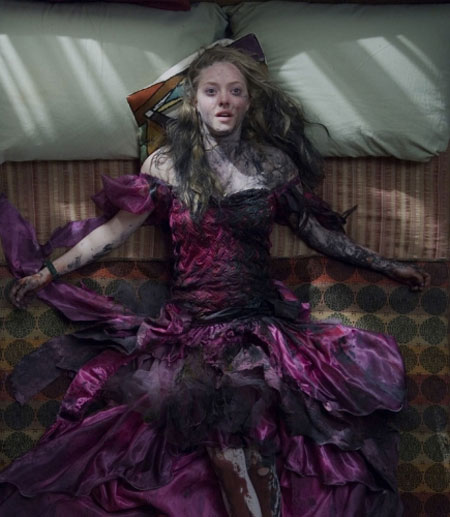