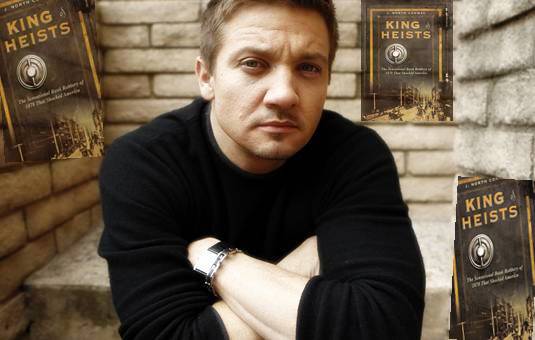 His performance as a battle-tested veteran William James in The Hurt Locker has quickly grabbed the attention of the global industry and the public, being nominated for and winning many awards including an Academy Award and BAFTA Nomination. He has since also received great acclaim for his supporting role of an absolute bad-ass in Ben Affleck’s The Town, has made a cameo appearance in Thor and will be taking on the role of Hawkeye in the upcoming Avengers movie, which is currently filming. Besides, the thesp will have major roles in no less than three movies in the next year including Mission: Impossible – Ghost Protocol, Hansel and Gretel: Witch Hunters, and The Bourne Legacy. But Jeremy Renner is still not tired at all! He has attached himself to lead  King of Heists, an adaptation of the J. North Conway book of the same name; based on the true story of George Leslie, who successfully stole around $3 million (about $50 million by today’s standards) haul from the Manhattan Savings Institution in New York, 1878. Renner will play a trained architect Leslie, the mastermind behind the whole plot, who was carefully planning many of his robberies including building exact replicas of his targets and to make sure it works, done a dry run. No director is still attached to the movie that newcomer Will Staples (Myth) will scribe. Renner’s shingle The Combine along with Black Bear Pictures will produce King of Heists. This time Renner has an opportunity moving forward to create an exciting new character. Do you agree? Check out the trailer for The Town that had Renner playing a bank robber for the first time. [youtube]http://www.youtube.com/watch?v=QQ7wcayQQLQ[/youtube]

Continue Reading
Advertisement
You may also like...
Related Topics:Jeremy Renner