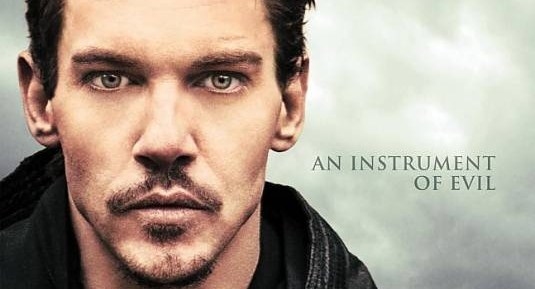 Jonathan Rhys-Meyers aka Valentine Morgenstern is an instrument of evil in the latest character poster for The Mortal Instruments: City Of Bones movie! Well, to be honest, the main antagonist of the movie definitely looks fantastic. The Angel blade burns you, just as God’s name chokes you – head inside to check him out… Let me first remind you that Harald Zwart directs the pic from a script written by Jessica Postigo Paquette, which is based on Cassandra Clare‘s first book of The Mortal Instruments series. The whole thing revolves around a seemingly ordinary teenager, Clary Fray, played by Lily Collins, who discovers she is the descendant of a line of Shadowhunters, a secret cadre of young half-angel warriors locked in an ancient battle to protect our world from demons. The action starts when her mother Jocelyn, played by Lena Headey, is attacked in their home and kidnapped by this lovely guy, in his search of the Mortal Cup. Beside the above mentioned names, the rest of The Mortal Instruments: City Of Bones cast includes Jamie Campbell Bower, Robert Sheehan, Kevin Zegers, Kevin Durand, Aidan Turner, Jemima West, Godfrey Gao and Jared Harris, and the movie is set to hit theaters on August 23rd, 2013. Click on the poster to enlarge & stay tuned for more updates!

A HOUSE IS NOT A HOME First Poster!
ONLY GOD FORGIVES New Poster & Behind-the-Scenes Featurette!
Advertisement