When I think about Bond movies, there’s always Judi Dench on my mind. 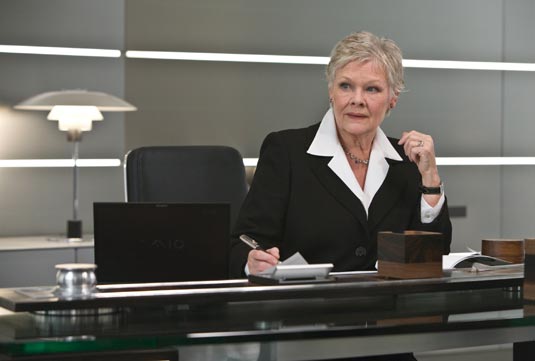 Don’t know why, maybe because she has already starred in six Bond films with her first appearance in 1995’s Goldeneye? Obviously.

So, it’s quite logical that the legendary actress will return as M, 007’s boss, in the new movie that, at this moment, has the working title Bond 23.

“Yes, I can’t tell you anything at all! Nothing… my lips are sealed,” she said, but then added: “You get to work with Daniel Craig. You get to go on location if you are very lucky and you get to wear a few sharp suits.

I’m looking forward hugely to working with Daniel again and with Sam who I’ve only ever worked with in the theatre. So that’ll be all good fun to do! I’m so glad it’s coming back, it’s wonderful.”

So, as you see, Bond is back after movie studio MGM battled its way through a financial crisis.

Let us just remind you that Sam Mendes will direct the new movie from a script by John Logan, Neal Purvis and Robert Wade.

With every new update, we’ll be back!