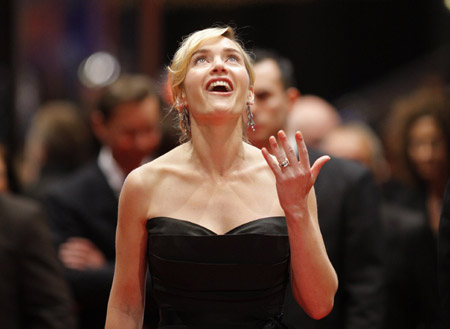 Kate Winslet will either win her first Oscar for her performance as a woman with a secret Nazi past in “The Reader,” or get the title of biggest loser for having been nominated for the coveted honor, and lost, six times! Winslet was nominated for “Sense and Sensibility” (1995), “Titanic” (1997), “Iris” (2001), “Eternal Sunshine of the Spotless Mind” (2004), “Little Children” (2006). One more loss and she will be tied at six as Oscar’s biggest losing actress with Deborah Kerr (nominated for Best Actress in a Leading Role) – “Edward, My Son” (1949), “From Here to Eternity” (1953), “The King and I” (1956), “Heaven Knows, Mr. Allison”, (1957), “Separate Tables” (1958), “The Sundowners” (1960) and Thelma Ritter (nominated for Best Actress in a Supporting Role) – “All About Eve” (1950), “The Mating Season” (1951), “With a Song in My Heart” (1952), “Pickup on South Street” (1953), “Pillow Talk” (1959) and “Birdman of Alcatraz” (1962). Winslet, has already picked up two Golden Globes for her role as a German woman with a teenage lover and a secret in “The Reader” and as a frustrated 1950s American housewife in “Revolutionary Road.” She has also won BAFTA and Screen Actors Guild Awards, and in emotional speeches, she has expressed shock at her wins after smiling bravely from her seat so often in the past. The betting in Hollywood ahead of the February 22, 2009 ceremony for the world’s top film awards is that Winslet should be getting her acceptance speech ready. “I think it is her time. When Academy members are voting, they are going to be thinking not just of “The Reader” but of “Revolutionary Road,” said Hollywood.com movie critic Pete Hammond, when talking about the two movies starring Winslet that were released within weeks of each other in 2008. “That is pretty daunting when you have two great performances like that back to back,” Hammond said. The four other best actress nominees are Anne Hathaway as a resentful sister in “Rachel Getting Married,” Melissa Leo in border smuggling drama “Frozen River,” Angelina Jolie playing a mother searching for her child in “Changeling” and Meryl Streep for her role in “Doubt.” “Kate has a solid lead. She is in a Holocaust movie, speaking with a foreign accent, she ages dramatically and she looks great naked – all key elements for a win,” said Tom O’Neil of awards website TheEnvelope.com.
Continue Reading
Advertisement
You may also like...
Related Topics:Kate Winslet, The Reader