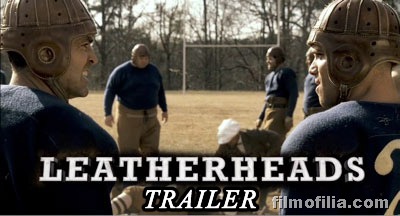 Universal has released the movie trailer for Leatherheads, a romantic comedy set in the world of 1920s football. The story follows the owner of a professional team who drafts a straight-laced college sensation in an attempt to legitimatize the sport, only to watch his new coach fall for his fiancée. Directed and starring George Clooney, co-starring John Krasinski, Renée Zellweger, and Stephen Root. Seems a little zany to me, but I keep telling myself that this is the same guy who directed Confessions of a Dangerous Mind  and Good Night and Good Luck. Click on picture and watch the trailer. What you you guys think? [youtube]http://www.youtube.com/watch?v=Ik68CWaTx78[/youtube]
Continue Reading
Advertisement
You may also like...
Related Topics:George Clooney, John Krasinski, Leatherheads, Renée Zellweger, Stephen Root