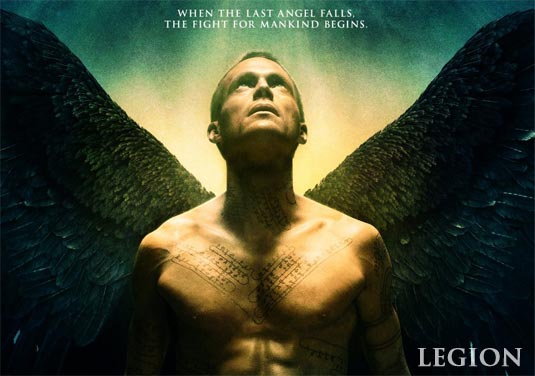 “Legion” begins in Los Angeles, where the angel Michael (Paul Bettany) literally falls from the sky and brings destruction with him. As the city falls into darkness (again: literally), he hits the road in search of Charlie (Adrienne Palicki), who, despite being an eight-months-pregnant non-virgin, is still the prophesied mother of humanity’s savior. The tiny desert diner where Charlie waitresses for owner Bob (Dennis Quaid) and his son Jeep (Lucas Black) serves as ground zero for the battle against agents of God in the form of “weak” possessed humans who function much like classic Romero zombies. With the diner surrounded and the patrons inside turning against one another, it’s up to Jeep and Michael to keep Charlie safe long enough for the second coming of Jesus to take his first baby breath…read more [FEARNet] Sadly, the much-needed depth brought to the characters in this simple story by the quality cast and the quieter dramatic moments isn’t going to do much for anyone sold on the movie merely expecting lots of creatures and action. As much as “Legion” looks great, filled with all sorts of interesting visual ideas, not all of them fully work – the possessed humans themselves are kind of lame, which doesn’t help matters since for many, they’re the biggest selling point…read more [ComingSoon]

Paul Bettany and Adrianne Palicki, Legion In “Legion” the world ends not with a bang but with a short stack. Recycling motifs from “The Birds,” “Near Dark,” the “Terminator” films and other apocalyptic fantasies, the film convenes a collection of strangers — upper-middle-class white family with issues, black father with handgun, etc. — at a diner in the Mojave Desert, where they are caught in the crossfire of a celestial battle. Their task is to mow down waves of angelically possessed humans (easy to kill even by zombie standards) and hold off a mace-wielding ninja angel while waiting for the diner’s waitress to give birth to the child who will save us all…read more [The New York Times]

Bob Hanson, Legion Beneath its superficial religious facade, Legion is really just a run-of-the-mill zombie flick, a Biblical I Am Legend. Bettany, an actor accustomed to smaller dramatic roles in films like A Beautiful Mind and The Da Vinci Code, looks perfectly at ease in his first major action role, wielding machine guns and bowie knives with equal aplomb. Conversely, first-time director Scott Stewart, a former visual effects artist, does little to prove himself worthy of such a promotion, serving up some impressive CGI work but not much else worthy of note…read more [Hollywood.com]

Dennis Quaid, Tyrese Gibson, Paul Bettany and Charles Dutton, Legion I originally saw footage from this film at the San Diego Comic Con and my thoughts then assumed Legion would “be somewhere in the C-to-B-level range fantasy/CG effort.” I wasn’t too far off. As much as I can begin respecting absurd films for grasping tightly to their absurd plot-lines they still have to deliver more than just repeat gunfire and stereotypical screaming demons. The killer grandma from the trailer was entertaining, a demonic kid was creepy and the moment where Lucas and Adrianne climb a mountain for no apparent reason was hilarious. Hardly a recipe for even an early year effects feature. As Legion continued to play I grew increasingly annoyed and just wanted it all to end. On home video it might make for a decent diversion, but it gives little reason to waste your money at the box-office watching something that delivers little more than its trailer did already…read more [Rope Of Silicon]

Paul Bettany (Michael), Legion While Bettany is “The Terminator’s’’ Kyle Reese in hacked-off angel’s wings, the movie’s cornered-ensemble element owes debts to “The Twilight Zone’’ and Stephen King, and is about as blunt in its attempts at character-revealing introspection. Grizzled diner proprietor Dennis Quaid chews over the difference between good intentions and plain old foolishness with grease-monkey son Lucas Black, who didn’t father Charlie’s baby, but is set on playing Joseph to her Mary. Customer Tyrese Gibson gets a vaguely offensive lecture on responsibility from God-fearing cook Charles S. Dutton. And Stewart dares to try a tentative bit of pro-choice/pro-life discourse, as Charlie laments her plight…read more [The Boston Globe]

I sat down in the theater and waited for the screening to begin. As I sat there quietly watching the pre-show advertisements, I resigned myself to the fact that I was stuck in front of a row of popcorn-munching kids who did not understand the concept of closing their mouths. Then the trailers rolled. The first trailer was for Iron Man 2, a film I can’t wait for, and when the title came up to the strains of Black Sabbath, a tear came to my eye. Then Legion started, and later, as the end credits began to roll, another tear came to my eye, but for a completely different reason…read more [Blogcritics] Film, like music, like television, like food, has always been slogged down by labels. We’re told comedies are supposed to be goofy, with outrageous one dimensional characters who neither change nor question their motives beyond the surface level. We’re told capers are supposed to be fast-paced, constantly weaving layers of intrigue upon red herring upon big reveal. We’re told pizza should feature pepperoni or sausage, occasionally, a mix of like nine vegetables. But sometimes we break these labels, burst through these preconceived notions and end up with The Forty Year Old Virgin, Murder On The Orient Express, barbeque chicken pizza. All of the best movies break genre, if only for a few minutes, to show us they’re more than just another romantic comedy, more than just another tired chicken parmesan dish. Unfortunately, all the worst movies break genre too, bouncing and sputtering without direction as they try to reinvent the wheel and leave the audience stranded in bleak, horrible, genre-hopping places like Paradise Falls…read more [Cinema Blend] “Legion” video review: [youtube]http://www.youtube.com/watch?v=4taQ7ecskiI[/youtube]
Continue Reading
Advertisement
You may also like...
Related Topics:Adrianne Palicki, Dennis Quaid, Legion, Paul Bettany, Scott Stewart, Tyrese Gibson