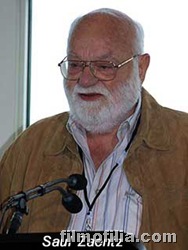 The Academy Award-winning producer behind the “Lord of the Rings” franchise has sued the films’ distributor, New Line Cinema, to force it to disclose its accounting for the multibillion-dollar epic. The lawsuit, filed on Thursday in Los Angeles by octogenarian producer Saul Zaentz, was at least the second involving profits from the trilogy against New Line, which is accused in both suits of hiding profits. A lawsuit brought by director Peter Jackson over profits from the first film caused a rupture that has New Line considering a new director for the fourth film, “The Hobbit.” Zaentz acquired the rights to J.R.R. Tolkien’s “Lord of the Rings” and “The Hobbit” novels in 1976 and licensed them to Miramax Film Corp, which later assigned the license to New Line. Zaentz contends the license specified that he would receive a share of the adjusted gross receipts from the films, which grossed more than $3 billion at worldwide box offices, as well as the right to audit New Line’s books. The lawsuit said New Line breached its contract by refusing to cooperate with an audit by Zaentz’s company, and asks a judge to force New Line to cooperate with the audit and to pay damages. A spokeswoman for New Line, a unit of Time Warner Inc, had no comment.
Continue Reading
Advertisement
You may also like...
Related Topics:Lord of the Rings