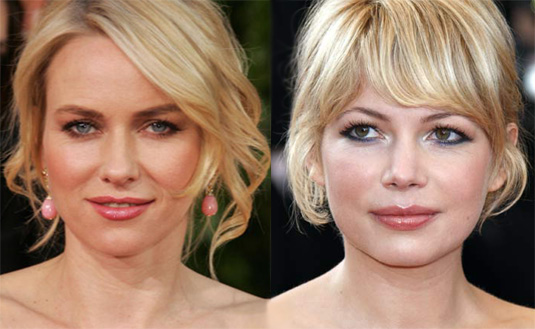 Hollywood just enjoys in this kind of double projects. So no wonder this kind of information was announced last week at the Cannes Film Festival that Naomi Watts will play Marilyn Monroe in a biopic based on author Joyce Carol Oates’s controversial, fictionalized memoir, 2000’s Blonde. Meanwhile, 29-year-old Michelle Williams is in active negotiations to play Monroe in a film directed by Simon Curtis. Sorry, what? Are we going to vote now who will make the better Monroe? Forget it! So, let’s clear things out! Naomi Watts is set to star in a biopic of Marilyn Monroe, based on a controversial book which detailed the actress’s love affairs and encounters on the casting couch. The movie, titled Blonde, is reportedly slated to start filming in January, and it will be directed by Andrew Dominik, the moviemaker behind The Assassination of Jesse James by the Coward Robert Ford. He looks very excited about this project, since he already explained: “Why is Marilyn Monroe the great female icon of the 20th Century? For men she is an object of sexual desire that is desperately in need of rescue. For women, she embodies all the injustices visited upon the feminine, a sister, a Cinderella, consigned to live among the ashes. I want to tell the story of Norma Jeane as a central figure in a fairytale; an orphan child lost in the woods of Hollywood, being consumed by that great icon of the twentieth century.” On the other hand, Michelle Williams will play a more non-fiction version of the star in a film based on Monroe’s time in England while shooting the film ‘The Prince and the Showgirl’ with Laurence Olivier. The film will take place in the mid-1950’s and will be directed by Simon Curtis, with title My Week with Marilyn. We’re definitely interested in more details about those two projects, so we’ll keep an eye on them. If you’re Monroe fan, than we’re sure you’re excited about both projects, so make sure you stay tuned for more info!
Continue Reading
Advertisement
You may also like...
Related Topics:Andrew Dominik, Blonde, Michelle Williams, My Week with Marilyn, Naomi Watts, Simon Curtis