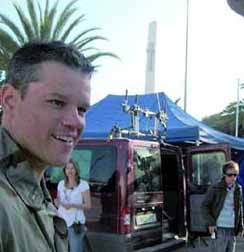 Hollywood has made movies about the war in Iraq before. But a new movie ‘Green Zone’ is blurring the lines between art and life by using US soldiers, who have served time in the Middle East – as actors. ‘Green Zone’ is an upcoming thriller film written and directed by Paul Greengrass. The film is based on the 2006 book Imperial Life in the Emerald City by journalist Rajiv Chandrasekaran. It stars Matt Damon, Amy Ryan, and Greg Kinnear. Production began in January 2008 in Spain and will move on to Morocco. A release date has yet to be determined. Matt Damon portrays an officer who helps a senior CIA officer in the search for weapons of mass destruction. Damon joined the film with the assurance that production would conclude by April 14, 2008 so he could start working on the Steven Soderbergh film ‘The Informant’ on April 15, amidst the scheduling difficulties caused by Writers Guild of America strike. Amy Ryan plays a foreign correspondent for The New York Times who investigates the U.S. Update: Photos from the Central London set of Paul Greengrass’s “Green Zone” (Matt Damon)