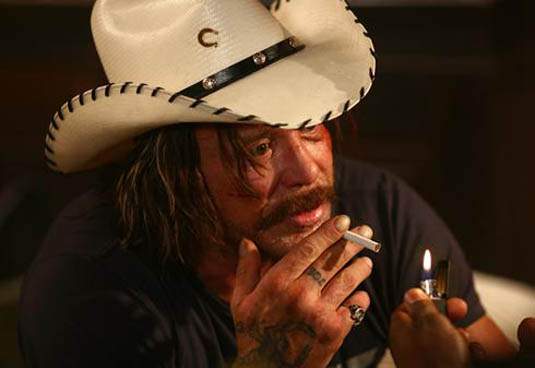 Check out the first official photo of Mickey Rourke who stars, after successful Darren Aronofsky’s “The Wrestler,” in “13″ as a convict in a Mexican prison who is sold into thecompetition. Director Géla Babluani, who wrote and directed the original, is back to adapt and direct the English-language remake of the 2005 French movie “13 Tzameti”, which will star Rourke, Jason Statham, Ray Liotta, Ray Winstone, 50 Cent, David Zayas, Sam Riley and Wayne Duvall. The original, “13 Tzameti,” won the 2006 Sundance Grand Jury Prize and Gela Babluani won best director at the Venice Film Festival. The film tells the story of Sebastian, a young man who has decided to follow instructions intended for someone else, without knowing where they will take him. Something else he does not know is that Gerard Dorez, a cop on a knife-edge, is tailing him. When he reaches his destination, Sebastian falls into a degenerate, clandestine world of mental chaos behind closed doors in which men gamble on the lives of others men. Sam Riley plays the title character, a young man who stumbles into an underground competition where the wealthy gamble on human beings in a Russian Roulette-like competition. Ray Winstone will play a competitor who has been sprung from a mental institution to participate and Ray Liotta will play a cop on the trail of the illegal game. 50 Cent stars as an employee assigned to escort Rourke’s character to the bloody game. Jason Statham, plays man who bets on the competition and has a peculiar interest in one of the competitors. “13” is slated for release in 2010.
Continue Reading
Advertisement
You may also like...
Related Topics:13, 50 Cent, Jason Statham, Mickey Rourke, Ray Liotta, Ray Winstone, Sam Riley