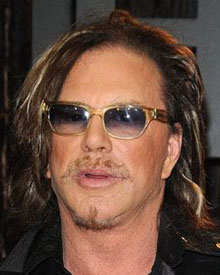 Mickey Rourke has signed on to star in Tarsem Singh‘s War of the Gods. Rourke has been cast as the villain, King Hyperion and will star opposite Henry Cavill and Freida Pinto. The story about a Greek mythological battle, follows a young warrior Theseus who leads his men into battle with the immortal Greek gods to defeat evil and the powerful elder gods of the Titans in order to save mankind. Pinto will portray Phaedra, an oracle priestess who must join Theseus, played by Cavill, on his quest to prevent the cataclysmic war from erupting. The Greek mythology epic is directed by Tarsem Singh (The Cell, The Fall) from the script written by Jason Keller. Keller wrote the most recent draft of the script and the original screenplay was written by Christian Gudegast. Production is set to start in April 2010. Rourke will be seen next as the Russian villain in Iron Man 2 opposite Robert Downey Jr.
Continue Reading
Advertisement
You may also like...
Related Topics:Dawn of War, Freida Pinto, Henry Cavill, Immortals, Mickey Rourke, tarsem singh, War of Gods