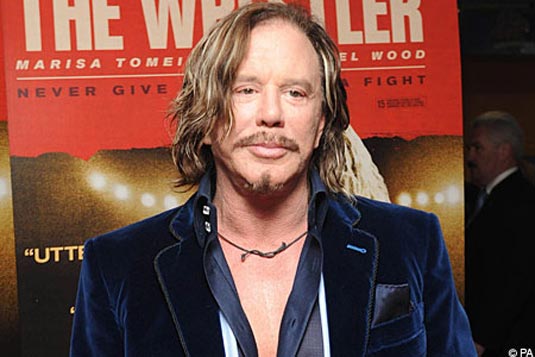 According to Deadline, Mickey Rourke is in talks to join the cast of Albert Hughes‘ Motor City. They also confirm that the actor is still on track to reprise his role as Marv in Robert Rodriguez‘s Sin City: A Dame to Kill For. After seeing various folks like Jake Gyllenhaal, Dominic Cooper, Jeremy Renner, Clive Owen, Amber Heard and Gary Oldman come and go from the long developing Motor City, director Albert Hughes will probably take whoever he can get at this point. Right now, Gerard Butler is sitting in the lead role, and now he’s got a co-star. Mickey Rourke has joined the movie in (what we presume is) the villain role, but the report isn’t clear on that point. Scripted by Chad St. John, the story follows a small-time crook who is framed and sent to jail, and then goes after the guys that put him there. But the big twist of this one is that the protagonist only has one line in the whole movie, so that should be interesting… if it ever gets to be made. Maybe this will be the combo that gets the movie rolling, but I would personally have preferred Gary Oldman as ‘baddie’ (I mean… The Fifth Element, anyone?). Or maybe Renner – he doth seem quite bad-ass-y in them trailers for the latest Bourne installment. As of yet, no word on when this might roll, probably because they’ll need to find the female lead first, anyway.
Continue Reading
Advertisement
You may also like...
Related Topics:Albert Hughes, Amber Heard, Clive Owen, Dominic Cooper, Gary Oldman, Gerard Butler, Jake Gyllenhaal, Jeremy Renner, Mickey Rourke, Motor City, Robert Rodriguez, Sin City, Sin City: A Dame to Kill For