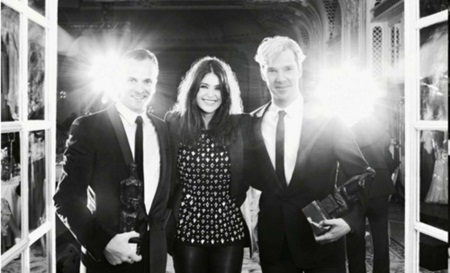 Benedict Cumberbatch and Gemma Arterton are being reportedly lined up for roles in Absolutely Anything, a long-gestating sci-fi comedy that reunites the several of the Monty Python’s Flying Circus gang. In the works since 2010, Absolutely Anything had John Oliver attached, but at the start of this year he wasn’t mentioned. ‘Sci-fi farce’ will feature Pythons Terry Jones, Terry Gilliam, Michael Palin and John Cleese voicing aliens who are able to give humans the power to do ‘absolutely anything.’ The story revolves around a teacher who benefits from the extra terrestrials’ aid: he soon discovers he has magical powers and can make things happen with the wave of his hand such as wiping out classrooms of badly behaving students and bringing people back to life. However, he experiences mishap after mishap as he tries to learn how to use these powers. Jones is finally gearing up to get rolling on Absolutely Anything which will be based on a script he developed with Gavin Scott and will also include voiceover from Robin Williams. Shooting is set to begin in the first quarter of 2013. Cumberbatch recently signed on to play The Beatles manager Brian Epstein in The Fifth Beatle, while Arterton recently signed up for the comedy Walking On Sunshine with Kylie Minogue.