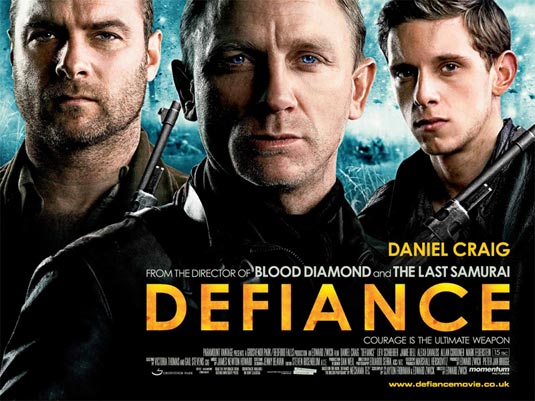 Another poster for the upcoming “Defiance” movie has just debuted over at EmpireOnline featuring shots of Daniel Craig, Liev Schreiber and Jamie Bell. The film revolves around Jewish brothers (Craig, Schreiber and Bell) living in Nazi-occupied Poland who escape into the Belarussian forest where they join Russian resistance fighters in battling the Nazis. Throughout the war, they build a village inside the forest and save the lives of more than 1,200 Jews. Zwick’s screenplay is based on Nechama Tec’s book “Defiance: The Bielski Partisans.” “Defiance” opens to theaters December 12th.
Continue Reading
Advertisement
You may also like...
Related Topics:Daniel Craig, Defiance, Edward Zwick, Jamie Bell, liev schreiber