Summit Entertainment has released a new clip, image and high res outdoor banner for David Slade’s upcoming The Twilight Saga: Eclipse. Bella Swan is reunited with the love of her life (and vampire), Edward Cullen. Her life is back to the way it was before the Cullens left, except for one major thing. Before Edward left, Bella had not considered Jacob Black (werewolf) her best friend, and she is in vain trying to make Edward and Jacob make peace and be friends. She is torn between the love she feels for Edward and the strong friendship between her and Jacob. Can she make them see reason, and can they be good to each other to keep from hurting Bella? And there are new dangers lurking around the corners; Seattle is stalked by mass murderers beyond humanity. Who’s behind this, and what connection does it have with Bella? Hit the jump and watch the new clip. The third adventure will star Kristen Stewart, Robert Pattinson, Taylor Lautner, Bryce Dallas Howard, Ashley Greene, Billy Burke, Peter Facinelli, Elizabeth Reaser, Nikki Reed, Kellan Lutz, Jackson Rathbone and Dakota Fanning. The Motion Picture Association of America has released its rating for Eclipse, awarding it the suspected PG-13, as was stipulated in author Stephenie Meyer‘s original movie contract. Like Twilight and New Moon, Eclipse is rated PG-13, but this time it’s for “intense sequences of action and violence, and some sensuality.” Considering the massive battle that takes place between vampires and werewolves, we’re not surprised that the movie contains more action and violence, especially knowing director Slade’s previous vampire flick, 30 Days of Night. Twilight’s Eclipse opens June 30. 2010. 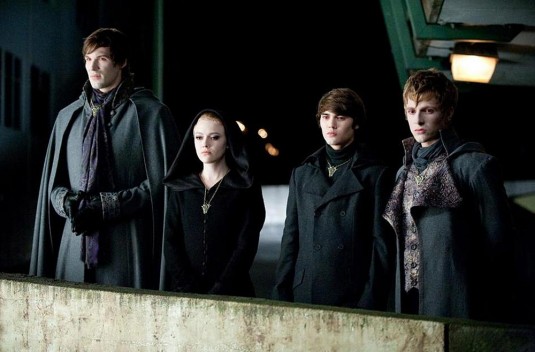