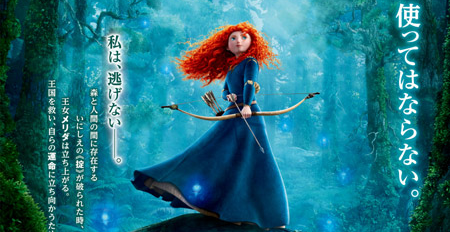 Have a look at a lovely Japanese poster for the Pixar’s Brave movie, as well as a trailer featuring lots of new footage, hints of several new plot elements, and some really breathtaking shots. The animated adventure features the voices of Kelly Macdonald, Emma Thompson, Billy Connolly, Julie Walters, Kevin McKidd, Craig Ferguson and Robbie Coltrane. Previously titled The Bear and the Bow, it was written by Brenda Chapman and Irene Mecchi, and directed by Mark Andrews, and co-directed by Chapman.

Since ancient times, stories of epic battles and mystical legends have been passed through the generations across the rugged and mysterious Highlands of Scotland. In Brave, a new tale joins the lore when the courageous Merida (Macdonald) confronts tradition, destiny and the fiercest of beasts. Merida is a skilled archer and impetuous daughter of King Fergus (Connolly) and Queen Elinor (Thompson). Determined to carve her own path in life, Merida defies an age-old custom sacred to the uproarious lords of the land: massive Lord MacGuffin (McKidd), surly Lord MacIntosh (Ferguson) and cantankerous Lord Dingwall (Coltrane). Merida’s actions inadvertently unleash chaos and fury in the kingdom, and when she turns to an eccentric old Wise Woman (Julie Walters) for help, she is granted an ill-fated wish. The ensuing peril forces Merida to discover the meaning of true bravery in order to undo a beastly curse before it’s too late.’ 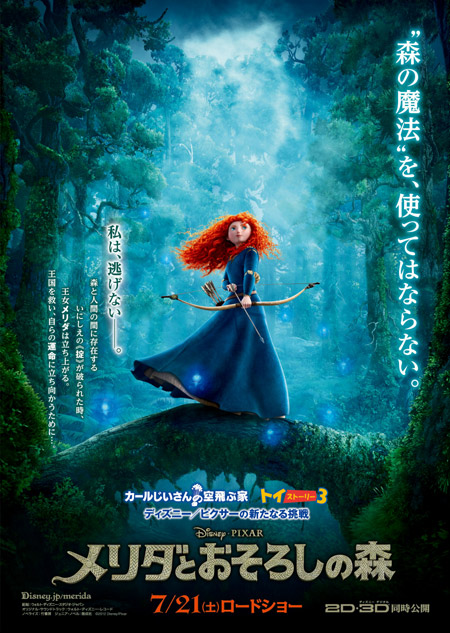