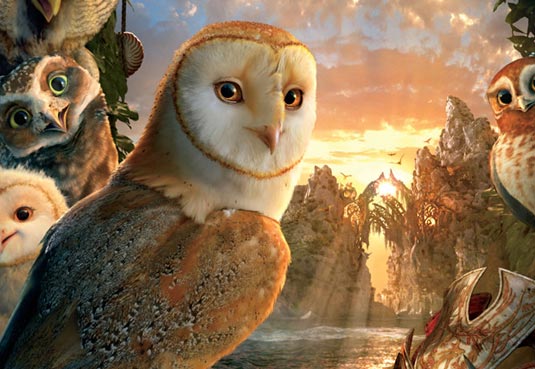 Yahoo! Movies has premiered a new movie poster for Zack Snyder’s Legend of the Guardians The Owls of Ga’Hoole. Soren, is a young owl enthralled by his father’s epic stories of the Guardians of Ga’Hoole, a mythic band of winged warriors who had fought a great battle to save all of owl kind from the evil Pure Ones. While Soren dreams of someday joining his heroes, his older brother, Kludd, scoffs at the notion, and yearns to hunt, fly and steal his father’s favor from his younger sibling. But Kludd’s jealousy has terrible consequences–causing both owlets to fall from their treetop home and right into the talons of the Pure Ones. Now it is up to Soren to make a daring escape with the help of other brave young owls. Together they soar across the sea and through the mist to find the Great Tree, home of the legendary Guardians of Ga’Hoole–Soren’s only hope of defeating the Pure Ones and saving the owl kingdoms. The screenplay was co-written by John Orloff (Band of Brothers, A Mighty Heart) and John Collee (Master and Commander, Happy Feet, Creation). The movie features voice acting from Emily Barclay, Ryan Kwanten, Jay Laga’aia, Miriam Margolyes, Richard Roxburgh, David Wenham, Abbie Cornish, Emilie de Ravin, Helen Mirren, Sam Neill, Geoffrey Rush, Jim Sturgess and Hugo Weaving. Legend of the Guardians The Owls of Ga’Hoole opens in 3D, 2D and IMAX 3D theaters on  September 24th