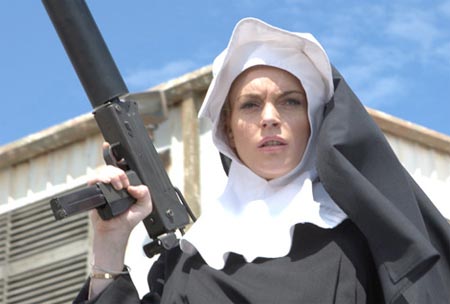 FilmTotaal.nl has posted the first photo of Lindsay Lohan in Robert Rodriguez’s new movie Machete. The actress plays a gun-toting nun (April Benz) and a new photo has surfaced that features her in some blatant holy wear. Based on Machete, the faux trailer from “Grindhouse” the film is being co-directed by Rodriguez with protege Ethan Maniquis. The highly skilled Federale Machete is hired by some unsavory types to assassinate a senator. But just as he’s about to take the shot, he notices someone aiming at him and realizes he’s been set up. He barely survives the sniper’s bullet, and is soon out for revenge on his former employers, with the reluctant assistance of his old friend Cheech Marin, who has become a priest and taken a vow of nonviolence. If you hire him to take out the bad guys, make sure the bad guys aren’t you! Danny Trejo is playing the title character and Robert De Niro, Jessica Alba, Michelle Rodriguez, Steven Seagal, Lindsay Lohan, Cheech Marin, Don Johnson and Jeff Fahey play supporting roles. 20th Century Fox won the bidding war for the rights to Machete and will release the film in theaters on September 5th, 2010.
Continue Reading
Advertisement
You may also like...
Related Topics:Danny Trejo, don johnson, Ethan Maniquis, Jessica Alba, Lindsay Lohan, Michelle Rodriguez, Robert de Niro, Robert Rodriguez, Steven Seagal