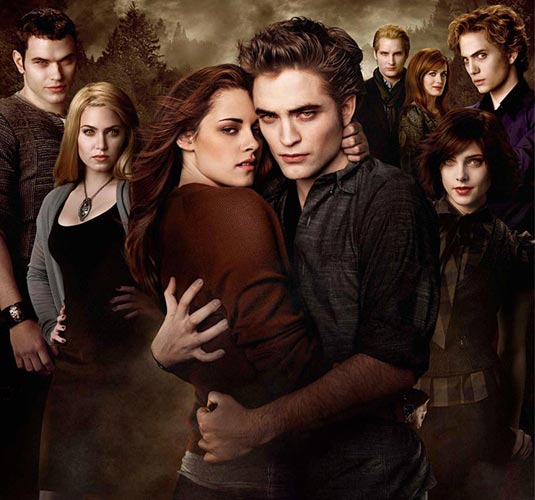 “The Twilight Saga: New Moon” is the second movie based on the series of four vampire-based fantasy and romance books by author Stephenie Meyer. The New Moon movie continues the story of the first Twilight movie about the ill-fated romance between mortal Bella Swan, played by Kristen Stewart, and vampire Edward Cullen, played by Robert Pattinson. New Moon goes through great pains to present itself as a descendent of Romeo And Juliet, except without all that icky tragedy in the end. There are warring clans—in this case, werewolves and vampires—a rival suitor, tragic miscommunication, and at the center of it all, two self-absorbed teenage lovers. Throw in a revenge subplot and an ancient, power-hungry clan of evil Italian vampires, and it all sounds potentially thrilling. But in spite of its wealth of conflict, New Moon suffers from a dearth of accompanying tension and excitement, thanks to the increasingly tedious relationship at its center…read more [AVClub] The success of the second film adaptation of author Stephenie Meyer’s wildly popular supernatural romance series, “The Twilight Saga: New Moon” has less to do with vampires and werewolves than with zombies. You know the kind I mean. Not the flesh-eating ones but the ones who have been counting down the hours and minutes to the release of the film. The slack-jawed legions who will stagger into theaters this weekend, clutching their preordered tickets in their outstretched hands, regardless of what they hear about the movie. I could say, for instance, that the movie is little more than your standard love triangle between a handsome, if slightly priggish bloodsucker, a hotblooded lycanthrope and the mortal girl who is caught between them. And that would be true, if a less than accurate assessment of the film’s many visceral pleasures. And it would do nothing to dissuade a diehard fan from going to the movie…read more [The Washington Post]

New Moon finds Edward and Bella settling into life as high school sweethearts in Forks, Washington, although she’s already worrying about future complications. She wakes on her 18th birthday from a dream in which she has turned into her grandmother while 108-year-old Edward has remained his perennially youthful, undead self. This scenario has become common. We’ve seen variations on the theme of time playing tricks in The Curious Case of Benjamin Button, The Time Traveller’s Wife and Dorian Gray. Welcome to the Botox generation’s nightmare…read more [Stuff.co.nz] In the first movie, Edward memorably described Bella as “my own personal brand of heroin” and, in the months that follow, her heartbreak resembles a form of cold turkey whose symptoms include nightmares, listlessness and being followed around by a maudlin indie soundtrack. When she discovers her ravenous Romeo’s image appears whenever she’s facing danger, Bella starts flirting with disaster, riding motorbikes and jumping off cliffs in increasingly desperate bids to see her true love one last time. Meanwhile she attracts the affections of local Indian Jacob (Taylor Lautner) who has a monstrous secret of his own…read more [Mirror.co.uk]

Under Chris Weitz’s direction, the actors have gained some confidence, and this chaste love triangle among creatures of the night has all the requisite looks of tortured longing. What it misses is any animating pulse: we just wait and wait for the bleeding obvious. The movie is best enjoyed for its dowdy sops to teen culture — vampires with email addresses, lycanthropes with six-packs — but for anyone on the outside looking in, the insulation of the characters from real danger makes it a bit of a drag…read more [Telegraph.co.uk]

The surprise here is Taylor Lautner. Very unimpressive in the first film and not much better in the early scenes of this one, the newly muscular teenager suddenly becomes a decent little actor at the halfway point when he dons a new haircut and struts around topless. A scene with him and Bella standing in the rain and him struggling with a secret actually has some effective delivery and pathos. Considering Lautner’s acting improved so much sans shirt, I wonder if there might have been Oscar buzz had he taken off his pants. Stewart herself can’t seem to take her eyes off his chest throughout their scenes together…read more [DarkHorizons] Weitz brings a few more flickers of humour to the narrative, but the essential, appealing earnestness of the book remains, whole-heartedly embraced. New Moon is a story about longing, and loss, and the dangers of desire. For its screen incarnation, one of its strongest elements is the performance of Stewart. There’s a toughness and introspection to her characterisation of Bella, but there’s also something vulnerable and youthful in her depiction of the pain, the immediacy and the extremes of adolescent yearning…read more [TheAge]

Kristen Stewart as Bella Swan and Robert Pattinson as Edward Cullen, New Moon Stewart is the heart and soul of the film, and not only because her Bella is surrounded by characters who literally have neither one nor the other. She gives both weight and depth to dialogue (“You’re just warm. You’re like your own sun”) that would sound like typical chick-lit blather in the mouth of a less engaging actress, and she makes Bella’s psychological wounds seem like the real deal…read more [Variety] The acting has improved enormously since Twilight, particularly in the case of Taylor Lautner, who delivers a strong, likeable performance as Jacob and has genuine chemistry with Stewart. The plot is much more engaging this time round too, both emotionally and dramatically, though Pattinson’s legions of screaming fans may be disappointed by his relative lack of screen time. Pattinson and Stewart are both good and there’s strong support from Ashley Greene (as Alice Cullen) and Anna Kendrick (as Bella’s non-vampire friend Jessica), whilst Dakota Fanning makes a memorable impression as Jane, a sinister member of the Volturi…read more [ViewLondon.co.uk]

Kristen Stewart and Billy Burke, New Moon It’s not exactly a celebration of female independence, but New Moon still has a handle on its young-adult audience: Hormonal frustration runs amok, and boys become attractive yet dangerous when they come of age (only the good ones keep their monsters in check). This time, we get not just vampires but werewolves, too—spectacular CG creatures that snarl and pounce before transforming back into buff, topless young studs…read more [TimeOut]

Peter Facinelli, Jackson Rathbone, Ashley Greene and Kellan Lutz, New Moon New Moon effortlessly sweeps you along in a swirl of intoxicating passion. New Moon has one major flaw, being a supernatural adventure it seems to be packed with too much of romance. Robert Pattinson and Kristen Stewart carry great performance from Twilight. The screenplay at times seems weak but can surely make patient characters stick to their seats. The movie won’t disappoint the majority of its teenage fans. But it is a let down for many Twilight fans who felt that Catherine Hardwicke who had directed the first flick had improved upon Stephenie Meyer’s novel. New Moon doesn’t seem to justify why Chris Weitz was chosen over Catherine Hardwicke. At 112 minutes of runtime New Moon seems ideal for a romantic tale of this sort. Although no comparison to Twilight, New Moon is certainly a movie worth spending a few bucks on…read more [OneIndia]