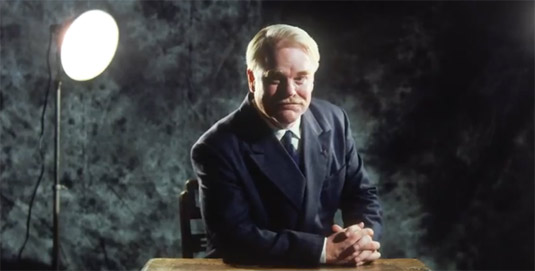 The first teaser video for Paul Thomas Anderson‘s The Master was mostly about Joaquin Phoenix as troubled ex-Navy man Freddie. But the new one gives us a look at great Philip Seymour Hoffman and Amy Adams as The Master’s wife. So, here’s a little preview of The Master movie which is set to open this October. The movie follows a charismatic intellectual, played by Hoffman, who launches a religious organization following World War II. Phoenix plays Freddie Quell, a drifter who becomes his right-hand man, but as the faith begins to gain a fervent following, he finds himself questioning the belief system and his mentor. The rest of the cast includes Laura Dern, Jesse Plemons and David Warshovsky. The film is rumored to be playing Venice this year but we know for sure that The Master is set to open on October 12th, 2012.
Continue Reading
Advertisement
You may also like...
Related Topics:Amy Adams, Jesse Plemons, Joaquin Phoenix, Paul Thomas Anderson, Philip Seymour Hoffman, The Master