Here’s a new image of lovely but evil Charlize Theron from the upcoming Snow White and the Huntsman project which is set to open on June 1st, 2012! As you see, nothing spectacular from this movie, it’s just Theron relaxing on her evil chair, wearing her spooky crown, thinking (probably) on how to kill Snow White or current gas prices… Anyway, Rupert Sanders directed Snow White stars Kristen Stewart as the only person in the land fairer than the evil queen (pictured above) who is out to destroy her. But what the wicked ruler never imagined is that the young woman threatening her reign has been training in the art of war with a huntsman, played by Chris Hemsworth, who was dispatched to kill her. The rest of the cast includes Sam Claflin who stars as the prince, Ray Winstone, Ian McShane, Eddie Izzard, Bob Hoskins, Toby Jones, Eddie Marsan, Stephen Graham, Lily Cole, Sam Spruell, Liberty Ross and Noah Huntley. 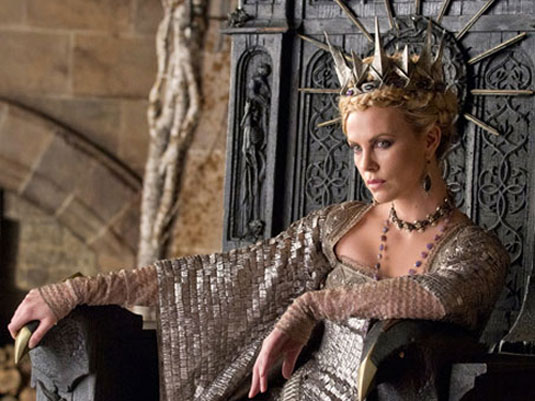