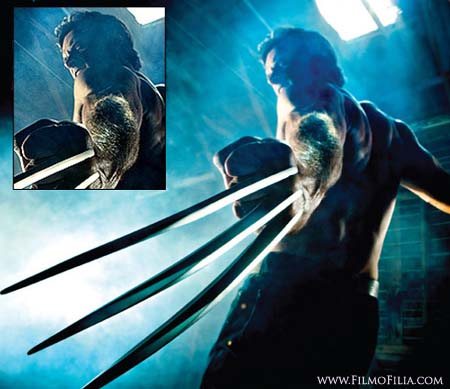 And here we have an exclusive new image of Hugh Jackman as Wolverine in X-Men Origins: Wolverine. Synopsis

The gruff, adamantium-clawed Marvel superhero Wolverine strikes out on his own in this X-Men spin-off starring series regular Hugh Jackman. The story gets under way as the boy who will become Wolverine makes a shocking discovery about his family bloodline, and gains a brother in the process. Flash forward to find the mutant siblings battling side by side through two world wars and Vietnam — where they are sentenced to death for killing a commanding officer — and Logan (Hugh Jackman) and his brother, Victor Creed (aka Sabretooth, played by Liev Schreiber), have joined a top-secret government task force. When their targets begin to include innocent civilians, conscientious Logan escapes to the Canadian Rockies, where he builds a home with pretty schoolteacher Kayla Silverfox (Lynn Collins). Informed by his old commanding officer William Stryker (Danny Huston) that the members of his old team are being targeted for death, Logan is heartbroken when Victor finds and kills Kayla. Vowing revenge, Logan agrees to take part in a dangerous experiment that will fuse his bones with a powerful metal alloy called adamantium, which makes him virtually indestructible and gives him the strength needed to defeat his powerful brother. Subsequently betrayed by Stryker, Logan (now Wolverine) sets out to find his blood-lusting brother and stop the cycle of violence once and for all. Along the way, the temperamental hero is joined by fellow mutants John Wraith (Will.i.Am) and Remy LeBeau (aka Gambit, played by Taylor Kitsch). But before Wolverine can seek vengeance against Striker and his brother, he’ll have to do battle with Deadpool (Ryan Reynolds) a formidable mutant instilled with many powers.