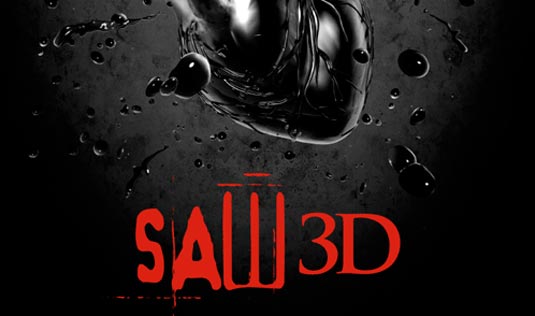 This October, one of the biggest, most successful horror franchises in movie history arrives in theaters in vivid, chilling 3-D with the release of Lionsgate’s SAW 3D. As a deadly battle rages over Jigsaw’s brutal legacy, a group of Jigsaw survivors gathers to seek the support of self-help guru and fellow survivor Bobby Dagen, a man whose own dark secrets unleash a new wave of terror… The first theatrical feature to be shot exclusively on the cutting-edge SI-3D digital camera system, SAW 3D brings the horrifying games of Jigsaw to life like never before.

This (said t0 be) final installment in the popular horror franchise stars Tobin Bell (Alice, Bump, Saw), Costas Mandylor (The Rogue, The Cursed), Betsy Russell (Chain Letter) and Sean Patrick Flanery (The Boondock Saints II: All Saints Day)., and features the long-awaited return of Dr. Gordon himself… Cary Elwes (The Adventures of Tintin: The Secret of the Unicorn, A Christmas Carol). You can see the Saw 3D official trailer here.

What do you think of new poster for Saw 3D? Do you think this movie will do well at the box office?