And new photo from The Avengers is here or should I say a new photo of Thor and Captain America at the same location in different pose this time? But who cares, there’s plenty of time – the movie is still just under 4 months away from hitting theaters. Directed by Joss Whedon, The Avengers continues the epic big-screen adventures started in Iron Man, The Incredible Hulk, Iron Man 2, Thor and Captain America: The First Avenger. So, we’ll have the opportunity to see a whole bunch of superheroes in one single project and of course, some great cast on board. As you already know, the movie stars Robert Downey Jr., Chris Evans, Mark Ruffalo, Chris Hemsworth, Scarlett Johansson, Jeremy Renner and Samuel L. Jackson. The Avengers opens in 3D on May 4th, 2012. 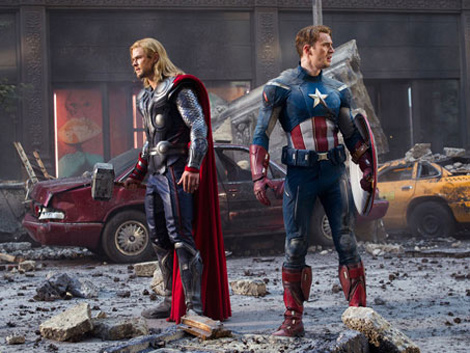